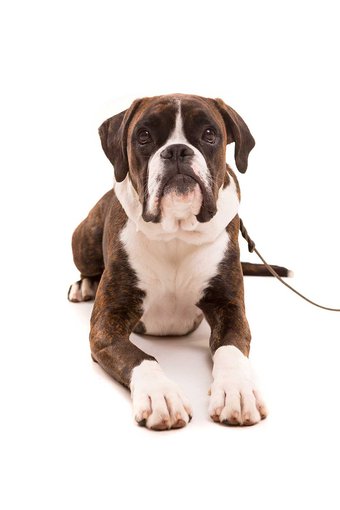 The Boxer is a dog with German origins, given the name of “Boxer” due to their tendency to “box” with their front legs in play, and not, as is often assumed, because their squished-up faces make them look as if someone smacked them on the nose!

History of the Boxer Dog

The Boxer is a dog from the Molosser grouping, developed from the extinct Bullenbeisser mastiff dog, which was renowned for its fearlessness and hunting prowess. The Boxer dog was bred as a lighter weight, faster variation of this breed, which was ultimately used during World War One as a pack carrier and messenger dog, as well as for guarding roles.

Appearance of the Boxer Dog

The Boxer dog’s most distinctive feature is of course its face, which has a short nosed, squashed-looking appearance. This trait is known as brachycephalic, and can also be seen in other dog breeds such as the Pug and the English Bulldog. Historically, the Boxer dog traditionally had their ears cropped and their tails docked, but thankfully both of these practices are illegal in the UK today.

The Boxer is a medium height dog with a medium build, and a relatively deep chest. Their coats are very short, fine and low-maintenance, and tthe includes a range of colours including fawn, brindle and white.

Temperament of the Boxer Dog

The Boxer is an intelligent, lively dog breed that loves to play and explore! They also have a reputation for being excellent with children of all ages, and making good companions for young people as well as adults. They are relatively strong for their height and may have a tendency to pull on the lead, but are eminently trainable and capable of retaining a wide range of commands.

They are highly personable and generally friendly to people when properly introduced, and bond very strongly with the people they love. Due to their historical usage as guard dogs, they can prove to be rather defensive of their home territory, and will soon bark at the sound of the doorbell or the postman approaching! 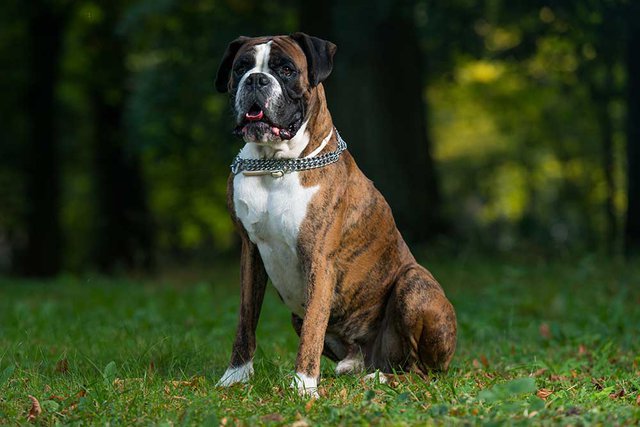 Health Considerations for the Boxer Dog

The average lifespan of the Boxer dog is just under ten years, placing it towards the bottom of the median lifespan rankings for dogs of an equivalent size. The brachycephalic muzzle of the Boxer dog may lead to respiratory problems and issues with maintaining body temperature during the warmer months, but this will vary depending on how pronounced the shortened muzzle proves to be on each individual dog.

It is also worth noting that for this same reason, many Boxer dogs are unable to swim, as they cannot keep their nose above the water while also propelling themselves forwards. So, think twice before you throw a ball or a stick into a pond for your Boxer to retrieve – unless you are ready to go in after them!

The Boxer dog is also prone to a range of inherited health problems, including:

How Best to Care for a Boxer Dog

The Boxer dog is a dog that truly thrives within the family home, and as long as they have their favourite people around them, they are usually happy. Their coats require virtually no maintenance, and they are not heavy shedders.

The Boxer dog is relatively lively and requires plenty of play and exercise, but care should be taken to ensure that the Boxer does not overheat, due to the structure of their muzzles limiting their potential intake of air. The same is true during the summer months, and you may need to pay a little extra attention to ensure that your Boxer can stay cool. Set up a shallow paddling pool in your garden during the summer months, and both your Boxer and your kids will stay cool and entertain each other for hours!

Stay Safe During This Halloween

A Guide to Buying The Right Sofa For You