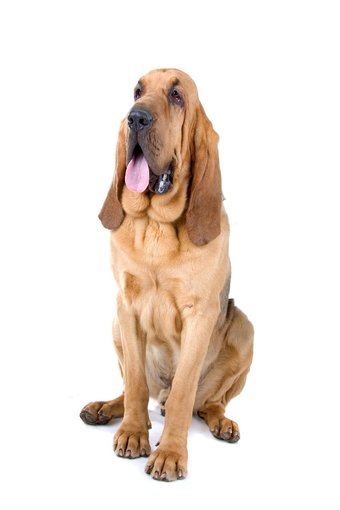 The Bloodhound is a large hound breed that hunts by scent and its sheer size and hunting characteristics mean its not suitable for many people’s lifestyles. Overall the breed is an affectionate and loving one, but their instinct to track every scent they find must be taken into consideration along with their enormous food bills.

History of the Bloodhound

The Bloodhound was originally bred for hunting wild boar and deer, but is now used mainly for trailing human scent as well as a recent development where it is now used to track missing pets. It was originally thought to be descended from hounds kept at the Abbey of St Hubert in Belgium, and in most European countries the beed is still known as the “St Hubert” hound or Chien de St Hubert.

A large to giant breed, covering a lot of ground and sometimes weighing up to 60 kg, they come in three colours (black and tan, liver and tan and red) and always with a short dense coat, that requires little maintenance.

Most recognised by their long ears and an expression that is often perceived as “sad”, the Bloodhound is an iconic breed and has changed very little over the years that it’s been recognised in the UK by the Kennel Club. The wrinkles on the head are a distinguishing feature, and these are very important as they protect the eyes when the bloodhound has its nose to the ground and is tracking hard through scrub and undergrowth, where thorns and twigs could otherwise damage the eyes. 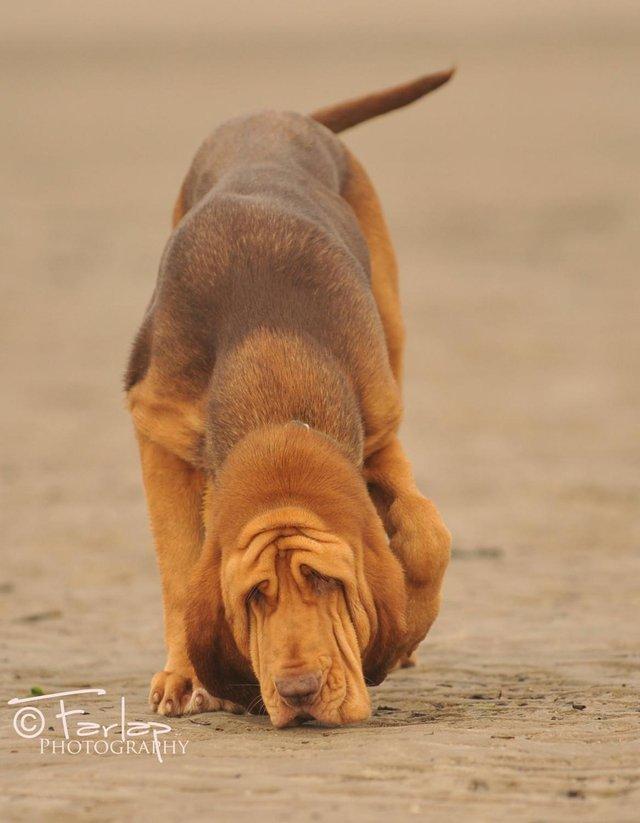 Temperament of the Bloodhound

Although the breed has a gentle, affectionate and kind temperament, their instinct to hunt and track, does mean they can be considerably difficult to train, especially on the lead and in recall. They are very strong willed and often boisterous, so special care needs to be taken when considering if this breed is the right one for your home and lifestyle. Their large flews mean that they are often prone to slobbering, and their packhound instinct means on occasions they like to communicate with “pack howling” sessions, and their baying may not be to everyones liking, especially the neighbours!

Health considerations for the Bloodhound

The Bloodhound, like most other large to giant breeds, has a disposition to gastric torsion and cancer, both sadly are often fatal. However they are no more prone than any other large breed. The Bloodhound breed club have an extremely active health committee and info on what the breed are doing to combat health issues, and more inforatmion can also be found over at Bloodhound health.

Although the Kennel Club currently have no mandatory health scheme requirements for Bloodhounds, when considering a puppy, it generally advised to ensure both parents have been hip and elbow scored and have a current heart certificate. Whilst these three things alone don’t make a healthy bloodhound puppy, its generally an indicator that the breeder is doing their very best for them and is working  to improve breed health. Any respectable breeder will show you these certificates when they meet you but you can check health results of any Kennel Club registered dog via the Kennel Club Health Test Results Finder.

How to best care for a Bloodhound

Bloodhounds are very active dogs and upon maturity (18months plus) will need plenty of exercise. However, as a tiny puppy they have a vast amount of rapid growth to do so care in the first 18 months is critical so as not to damage delicate joints and skeletal infrastructure. Carefully restricted exercise is paramount in the early days, and as they can be a little stubborn in the house training department, then they need someone to be mostly at home with them so they can be let outside every hour or so until training clicks in. They also have a tendency common to the hound breeds, to be very destructive, happily chomping any furniture or objects that they have access to. A habit that is often not appreciated by the house-proud, and this behaviour does not usually improve until after the puppy stage. 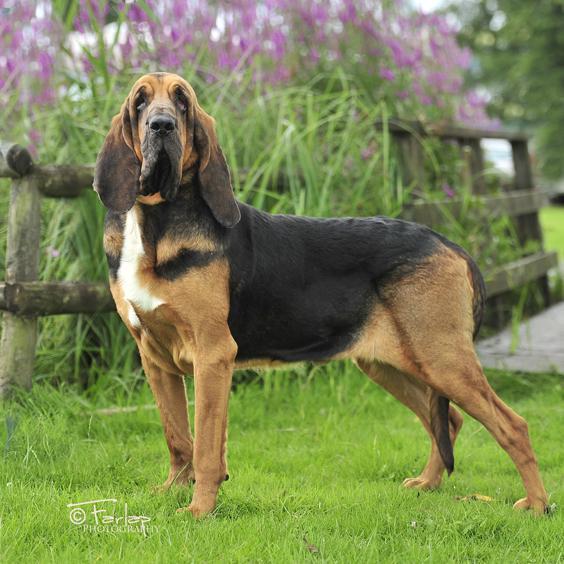 They are typical pack hounds and require their pack around them, whether it’s a human or canine pack. They cannot be left alone for long periods, such as when out at work, and do not respond well to changes in routine which can be stressful to them.

Once they are indoors they like nothing better than curling up on the sofa with their family, so if you have a strict “dogs off furniture policy” this is something you need to instill into the pup from day one as trying to shift 50 KG of sleeping hound can be quite difficult.

They are not noted for their obedience but, with patience and persistence by the owner, they can be trained, to a degree, However, in keeping with all Hound breeds, when they are off the lead, if they get a scent, they can “go deaf” when it suits them, so it is best to find a secure area (well fenced) to allow them to run, where they cannot access roads, railways or cyclists and other hazards..

Brushing should be a weekly job, with a soft bristle brush or a rubber glove, the hounds mostly love it. Black and tan coats are easiest to maintain as the Liver and the red coats tend to moult much more heavily, and may even need a furminator type tool on them once they start to moult. Eyes and ears need a wipe with moist cotton wool. Nails may need a trim every month or so.

Farlap are reputable Kennel Club assured Bloodhound breeders based in Devon. They have been raising champion Bloodhounds since 1990, and all the adult Bloodhounds they own are much loved family pets.