Although they do make great family pets, it is important to remember that this is a working breed and that they do have certain characteristics that some people might find difficult to live with.

The German Shepherd truly is a wonderful animal but if you haven’t had one before, please do some research first and talk to people who know the breed well.

History of the German Shepherd

The German Shepherd breed appeared late at the end of the 19th century in Germany and they were first exhibited at a show in Hanover in 1882. They were not like German Shepherds as we know them today though, being rough coated, short tailed and rather resembling mongrels. The German Shepherd Dog as we now know it didn’t really appear until after the Second World War.

The breed was actually created by the cross breeding of working sheep dogs from rural Germany by an ex cavalry officer called Max von Stephanitz whose aim was to create a working dog for herding which could trot for long periods.

A breed standard was drawn up and the first breed show took place in 1899 following which the GSD became firmly established across Germany. In 1906 the first dogs were exported to the USA . Since then, the breed has grown enormously in popularity and is now one of the most popular pedigree breeds in the UK as a pet, as well as being the favourite working breed for many forces, especially the police. They are widely used for security purposes because of their strong protective instincts.

Many people in the UK still call these dogs Alsatians which may partly be due to the fact that when they were first bred, the Alsace region of France was part of Germany where these dogs were very popular. In part it may also be due to the first and second world wars that the name Alsatian stuck, as the word ‘German’ had a negative connotation. Some people think that Alsatians are the traditional short coated black and tan dogs and that German Shepherds are the long coated dogs that have become popular, but this isn’t true.

Appearance of the German Shepherd

The German Shepherd is classified by the Kennel Club in the pastoral group, herding dogs that are associated with working cattle, sheep and other types of herds.

In terms of size, GSD’s are large dogs with the males being around 25 inches to the shoulder and bitches 23 inches. In terms of weight, an average healthy male should be around 35-40 kg and a bitch slightly less at 30-35 kg.

A German Shepherd should be slightly long in comparison to height and they should be lean and well muscled, not fat and flabby. Probably the most notable features of the GSD are their big sticky up ears which become wonderfully animated when they are listening to you and the big bushy tail which is great for sweeping any low lying tables you may have around the house. They have long muzzles and strong jaws with large sharp teeth, which can inflict a nasty bite. 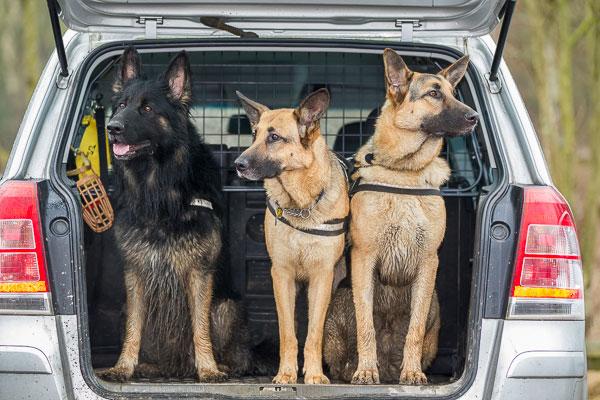 The colours accepted by the Kennel Club breed standards are black or black saddle with tan or gold to light grey markings. All black, all grey with lighter or brown markings are calledsables. Beware of people selling unusual colours such as blues as these are produced by mating two dogs with a recessive blue gene for no other reason other than they command a higher price as ‘designer dogs’. White GSD’s have also been exploited, with unscrupulous breeders interested only in profit rather than breeding for health and temperament. A significant proportion of blues and whites have health and behavioural issues.

Temperament of the German Shepherd

The German Shepherd should be steady, loyal, self assured, courageous and willing and should not be nervous, over aggressive or shy. Nervous aggression is something that we are now seeing more often as a result of bad breeding.

Because of the their protective instincts, the German Shepherd is a breed that needs to be well socialised from an early age so that it becomes used to people and other dogs. If not, aggression towards strangers and other dogs can be a problem. GSD’s make wonderful family pets but will protect family and home which could be an issue if you live in a busy household with lots of visitors.

As youngsters they can be very boisterous and can easily knock over children or elderly relatives, especially if you do not discourage the dog from jumping up when excited. These dogs don’t really mature until they are about 3 years old, so be prepared to be in for the long haul to get through the puppy and difficult teenager stage.

German Shepherds are also noisy dogs – they never miss an opportunity to have a good bark and can be very vocal, which may be a problem with neighbours.

There has always been indiscriminate breeding of German Shepherds right from the start, which has lead to problems with temperament and health. It is therefore important to seek out a reputable breeder if you are thinking of buying a puppy for a family pet.

Health considerations for the German Shepherd

As with any other breed, you should keep your GSD well exercised and fed on a good quality diet. Many GSD’s tend to suffer from a sensitive stomach so need either a good quality wheat free kibble or preferably raw feeding.

Common expensive health problems in young dogs include hip and elbow dysplasia which can be avoided if you chose a reputable breeder. The parents should be hip scored and the lower the score, the better.

Ear infections can be a problem so ears should be checked regularly and any conditions treated immediately so as to avoid chronic recurring infections.

Looking after a German Shepherd

GSD’s are very high maintenance dogs that require a lot of time, stimulation, training and exercise – you will never wear them out, they will always be ready for more. If you are a couch potato a GSD is not for you. Don’t buy a GSD if everyone in the house is out at work all day. A bored GSD can be very vocal and destructive and if left alone for long periods.

Get a GSD and get yourself a good pair of walking or running shoes and find some nice big open spaces to exercise your dog – forests are ideal. Be warned that they tend to like water, especially the filthy muddy stuff which sticks beautifully to their nice dense waterproof coat. They never shake the muck off outside but will wait until they get back into the house and take the opportunity to create some nice splatter patterns on your walls or nice clean curtains whilst also leaving muddy paw prints across your pale shag pile carpet. 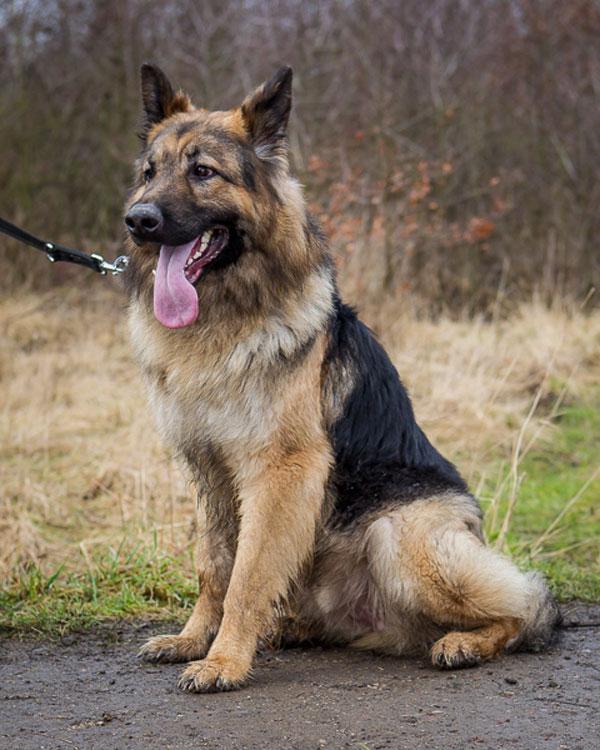 Unless your German Shepherd has been brought up around livestock, it is important to remember to keep your dog under control when out walking in rural areas. GSD’s usually have a very high prey drive and will chase small furries and sheep.

They also shed hair in copious amounts and although they only moult once a year, unfortunately it lasts for 365 days so your vacuum cleaner will work overtime and it’s unlikely that your clothes and furnishings will ever be free of dog hairs again!

The GSD is one of the pedigree breeds most likely to end up in rescue and there is a very significant problem in the UK of unwanted German Shepherd dogs. Many of the GSD’s that end up in the dog pounds will be put to sleep simply because they are surplus to requirement or because they are deemed difficult dogs by the pounds or less experienced general rescues.

We always have many German Shepherds looking for new homes so please consider a rescue dog before buying a puppy. Our dogs were all cute little puppies once.

We don't just rescue and rehome, we are also here to give free help and advice on all aspects of owning a German Shepherd Dog. Please visit our website for further information: http://www.germanshepherdrescue.co.uk/

Support Charities with Preloved this December

Caring for Your Guinea Pig in Winter

Is Your Child Ready For A Pet?

What To Do When Moving Abroad With Your Pet