The apparent abandonment of horses and ponies on land where they do not belong (fly grazing), has increased significantly over the last few years. We caught up with World Horse Welfare to learn more about this crisis. World Horse Welfare is the largest horse rescue and rehoming charity in Britain, and it took in an incredible 76% more horses in 2013 than the year before. The leading horse welfare charity has even had to install special intake systems to help it cope with the rising number of horses that need to be rescued in groups of 20+ who are largely unhandled. Other charities have seen equally worrying rises:

What is causing the current horse crisis?

The main two causes of this inevitable horse crisis both stem from the continuing poor economic climate. Firstly, with horses costing, on average, £100 per week to care for, less fortunate horse and pony owners are struggling to afford the cost of fundamental care. In some cases owners are being left with no choice but to rehome their horse or pony, and as there are fewer good homes available, this is also becoming more difficult. 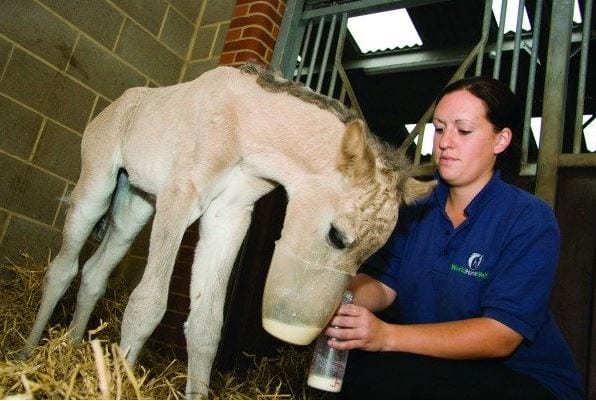 The second cause is over-breeding. Despite professional breeders reducing their numbers in line with the current demand of the market, some horse owners and irresponsible breeders believe they can gain benefit from breeding a foal for their own use instead of rehoming a young horse, or they simply are not preventing breeding between their horses. However, with 7,000 horses in Britain at risk of needing homes, these additional foals are simply adding to a growing horse population where there is a reduction in demand.

For every foal that is born, there is another horse that misses out on that chance of being re-homed. This strain on the horse market has even been reflected on the average price of a horse, with a pony costing as little as £5 in some markets.

Do you need to breed? – Video by World Horse Welfare

What can I do to help the current horse crisis?

If you are a horse owner, before you breed from your mare, ask yourself – do you really need to breed? To find out some more information, click here to read up on statistics pulled together by World Horse Welfare as part of their Need to Breed? intiative. Still not convinced? World Horse Welfare have also highlighted 10 horse breeding myths…

If you are looking to give a horse or pony a home, whether it be for competition, hacking, or simply for life long companionship…consider re-homing an experienced horse or pony instead of buying a younger horse. However if you are set on finding a younger horse or pony, then there are thousands of young animals waiting for homes in charities such as World Horse Welfare. By re-homing a horse from a charity, you will be making space for future unwanted horses in line with the horse crisis. Alternatively, we have thousands of owners looking to find new homes for their horses and ponies here on Preloved.

However, if you would like to buy a horse or pony, there are some things you should consider when doing so. Please refer to our previous post by the Blue Cross for more information here. If you are passionate about horse riding, but can not give a horse or pony the full time care they deserve, why not consider supporting a horse owner by sharing a horse as part of a loan?

Top 10 Best Cars For Winter: In Partnership With Heycar

How To Avoid ‘Fast Fashion’ With Kids Clothes

What to Do in the Garden in April