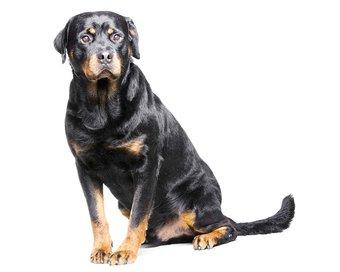 The large, sturdy Rottweiler, or “Rottie”, is the dog most likely to be seen on TV and in film as a formidable guard dog or vicious predator. However in reality, they are among the kindest natured and calmest of dogs, and are definitely worthy of consideration as a family pet.

History of the Rottweiler

The Rottweiler is among the most versatile of dog breeds, with a working history encompassing roles as diverse as guarding and protection, security and crowd control, and herding and livestock work.

They have a documented history of living alongside man as far back as the Roman empire, although the dog is most commonly associated with Germany, where they are still commonly used in working roles alongside of the German police.

Appearance of the Rottweiler

The Rottweiler is a large, strong and very muscular dog, with a compact build and plenty of power. They have large, wide heads in the classical mastiff style, with short ears and a short coat that is always black with hints of tan. Traditionally, the tail of the Rottweiler was docked, but now that this practice is thankfully illegal within the UK, the long, muscular and very waggy tail of the Rottweiler can be seen in all its glory!

Temperament of the Rottweiler

The Rottweiler is a placid, good natured and laid back dog that responds very positively to kind treatment and positive reinforcement training. Despite what various film directors would have you believe from their portrayal of the dog, the Rottweiler is not the bloodthirsty, snarling terror pictured in “The Omen” by any means! Just about the greatest risk of injury from keeping a Rottweiler comes from the possibility of them sitting on your foot.

They are not snappy or naturally aggressive, but are in fact eminently keen to please, easy to train, and very tolerant.  They are bold and steadfast, not easily spooked, and are incredibly courageous when the situation calls for it. They are loyal and bond strongly with their families, are infinitely tolerant and kind with children, and are naturally protective of their favourite people. 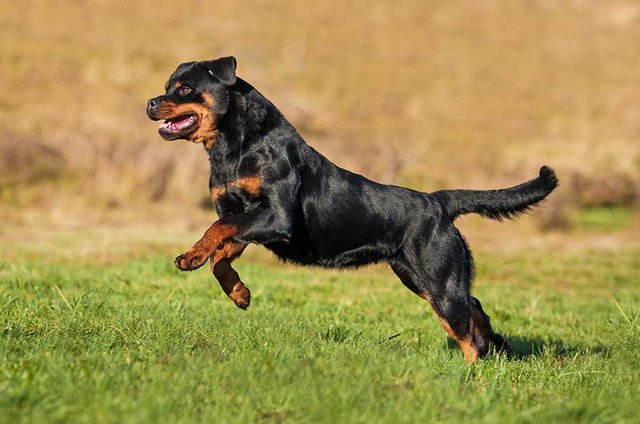 Health Considerations for the Rottweiler

The average lifespan of the Rottweiler is 9-10 years, and they tend to be relatively healthy and not particularly prone to a wide range of different health conditions. However, like many large breed dogs, they do have a slightly elevated propensity to developing hip dysplasia, although selective testing and breeding programmes have gone some way towards reducing the incidence rate of this condition within the breed as a whole.

In older age, the Rottweiler is particularly prone to developing various types of cancer, and cancer is one of the leading causes of death of the Rottweiler in old age. They can also be rather prone to obesity if they lead a rather sedentary life while still retaining their hearty appetites!

How Best to Care for a Rottweiler

The Rottweiler requires clear and unambiguous positive reinforcement training, and is a relatively easy breed to train. They are very versatile, and capable of adapting well to either family life or working roles, and while special consideration has to be given to keeping a large dog such as the Rottweiler, they are not considered to be a difficult or high-maintenance breed.

Their coats are very short and straight, and require almost no maintenance, and they are not particularly heavy shedders. They require moderate amounts of exercise, with at least two walks per day, and while they enjoy running around and play just like any other dog, they are built for comfort, not for speed!

The Rottweiler can be rather prone to piling on the pounds, so it is important to feed them a balanced diet, and ensure that their activity levels are ample enough to keep up with their love of food and treats!

Want a pug or Frenchie? Read this expert advice before you buy

Mother’s Day Gifts on a Budget!