Find Your Future with Preloved

Today is the future! In the 1989 film Back to the Future, Marty Mcfly, Jennifer and the Doc travel to this very day. Writer and director Robert Zemeckis predicted that there would be flying cars, hoverboards, self-lacing shoes and dog-walking drones. Not everything has turned out quite as the film makers imagined, as where we are, we definitely still need roads.

The characters travel to October 21st 2015 in their DeLorean time machine, and whilst the technology to create a time machine hasn’t quite been developed yet, wouldn’t it be wonderful to celebrate today by going for a ride around town in your very own DeLorean?

Well, BttF fans, we have DeLoreans for sale on Preloved! The iconic DeLorean DMC-12 was the only car produced by the Delorean Motor Company with only around two years of production between 1981-1983. Only around 8,500 cars were made, and today they are extremely rare. Their stainless steel body, gull wings doors and rear-mounted engine are extravagant features which make this car one of the most iconic cars in cinema history; it’s a revelation of the past, and a symbol of the future.

One of the Deloreans we have for sale on Preloved is a 1981 model. It has grey interior and the grooved bonnet which is highly sought after, as it is part of the original DeLorean design. The bonnet shape was developed during production and was changed in 1982 to make the bonnet completely flat. This car has only done a mere 35,000 miles and is in excellent condition due to the extensive refurbishment work which has been done.

Here is another 1981 model in excellent condition. Of course, the car has been imported from America but all taxes and fees are paid for. The interior is in very good condition, as is the stainless steel bodywork.

The first and only owner of this delightful 1982 DeLorean was a collector from Texas. The car’s interior and exterior are in great condition, and this beauty is advertised for £49,950. The original aluminium rims are still intact, as are the gull wing doors and 2.8L V6 engine.

This one is advertised for £31,950, has done 52,000 miles and is the 1981 model. It has undergone a full refurbishment, and the current owner claims that this particular car is in excellent condition and is ‘the most original out there’!

Universal Studios used various different cars when creating the Back to the Future trilogy, but the only car to be featured in all three films, referred to as ‘Hero A’, underwent a full restoration a few years back. The actual car is now on display at Universal Studios, Hollywood! 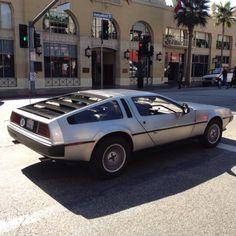 We love all things motor-restoration related here at Preloved, and combined with our love for the BttF Trilogy and the fact that today IS THE FUTURE, well… it really gets our time machines going!

P.s. Don’t forget to check out Preloved’s very own time machine. Who knows where you’ll end up?

Space-Saving Ideas For Your Small Bedroom

How to Make Your Living Space All About You

Interview With a Business Member | David Elliott from Wellhouse Leisure