If you’ve ever visited the Time Machine section on Preloved, you will notice a range of retro wonders for sale. Every now and again we like to take a walk down fashion memory lane, by featuring our favourite fashion decades here on the blog. This time the focus is on the sweet Seventies. 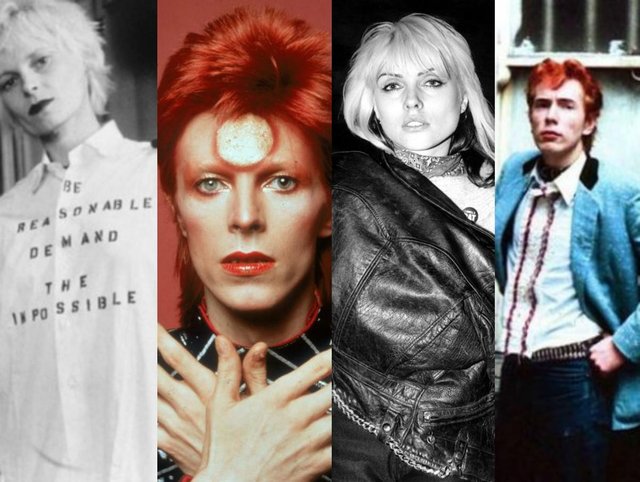 The 1970’s continued the androgynous styles of the 60’s but with added polyester, spandex and… Jumpsuits! Miniskirts, bell bottoms and hippie styles were still popular on the high street, alongside a new fashion love for even brighter colours and more glitz and glam! In an era where music reigned supreme, with the contrasting fashions originating from Disco and Punk and everything else in between, it was a decade full of exciting shapes, texture and colours.

The Influence of Music on 1970’s Fashion

The early 70’s was still a playful time with fashion trends and people still continued to have fun with their style. Bright and bold colours, alongside new shapes and styles of clothing naturally aligned itself with a plethora of emerging influences from the sixties. Mod fashions trickled through to the new wave of punk rock boutiques which continued to gain momentum throughout the decade.

Acts like David Bowie led the way when it came to tight fitting garments and platform shoes and emerging acts such as Blondie gave females a new, cool, style icon in the form of Debbie Harry. Music became an even bigger influence on fashion than ever before. In a time before the internet and social networking, it was one of the only ways to meet likeminded individuals – by bonding over their sense of style.

In the late seventies style became even more influenced by music, with the rise of punk bands such as The Sex Pistols. Vivienne Westwood, rose to fashion fame by using then husband, Malcolm McLaren’s boutique, based on the Kings Road London to sell her cutting edge garments. Creating a style of clothing which incorporated the shock value of punk, alongside traditional materials such as Scottish tartan, Westwood developed a style which was as outrageous as the music itself.

On the flipside of the punk trend, we also saw the continued boho and gypsy styling’s of Stevie Nicks influencing the sub culture fashions of the 1970’s. Loose waves in the hair, natural make up and tassled kimonos were often worn by women who wanted to echo this relaxed hippy style.  Men, who were also fans of the folk-rock genre, would opt for denim, a loose fitting shirt and a waistcoat or blazer to complete their look.

Other Fashion Trends from the 1970’s

More demure fashion icons of the day came in the form of models such as Jerry Hall and Janice Dickinson, who both added a touch of glamour to the era with their stunning looks and coiffured hair. Long eyelashes and a simple red lip added to their ultra-chic look.

Maxi dresses and jumpsuits were a popular choice which suited the relaxed lifestyle and were often teamed with a pair of platform shoes or sandals. Made from wood, cork or plastic, the platform shoe was a must-have footwear style and would be worn for any occasion. Floppy hats and hot pants were part of the casual girls’ summer uniform, and were perfect for those who wanted to show off their legs that wanted something a little bit more edgy than a mini skirt.

We’ve recently seen a rise in 1970’s inspired styles on the high street, with the return of fringed sleeves, button front suede skirts and even the fedora hat making an appearance! Platform over the knee boots were also a big trend for Autumn and Winter last year and a style set to be popular again for 2015. Even in the summer we are now seeing platform sandals rise in popularity too!

What’s your favourite decade for fashion?

Biting And Nipping: How To Train Your Puppy

How to Take Photographs for Preloved Adverts

Remove Green Algae from your Vehicle

How To Upcycle A Welsh Dresser