From London to Portugal: Searching for Simplicity

As part of our Write for Us series, Fiona Whyte shares her experience of swapping her high-flying career in London for a life of thrifty simplicity in the Portuguese mountains.

Eight years ago I was earning 60k and working in central London. Two years previous to that, I was diagnosed with a lung disease called Chronic Obstructive Pulmonary Disease. My partner and I decided it was time to leave London and head for the hills; said ‘hills’ turned out to be the breath taking mountains in central Portugal. Blessed with a calmer way of life, my health stopped deteriorating so dramatically.

Our new life, however, came at a price. Leaving behind the pollution and stress of London living meant that we also left behind the salaries. Constantly eating out, buying new bed linen because I was bored of how it looked, family theatre trips, Molten Brown bath foam, aged balsamic vinegar at £17 a bottle, big birthday and Christmas presents… they were all a thing of the past.

Now that material items were not as disposable, we became far more concerned with quality than ever before, and quickly learnt that ‘you get what you pay for’ is not always an accurate indicator. When it came to looking for a new sofa we were appalled at the cost weighed against quality and durability. We purchased a couple of old but well-made sofas from an auction site and had them reupholstered. 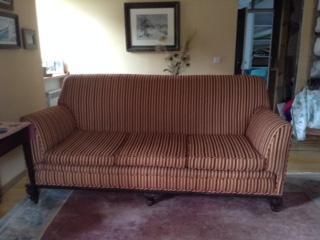 My partner and I, in our new life as thrifty money-savers, came to be like a pair of magpies. We both had a tendency to ‘come across’ interesting and obscure items, and were always having a sneaky peak into skips and usually pulling something out. We also began to hang on to things as we could never be sure when it might come in handy. As an artist and a crafts person, I was always picking up beads, interesting papers, bits of wood and car boot finds. Yup, we were borderline hoarders.

I suppose I had always had an eye for a bargain (who doesn’t love a great deal?), and our new situation had accentuated this trait in me. I had come across an interior and soft furnishings shop that was closing down nearby. A stunning pair of jacquard cream curtains that were just tacked together for display purposes were mine, along with an ugly blind and an opulent tie back. After our excessive bargain hunting, I had nowhere to put these things of course, so they stayed in my ‘might need’ collection. 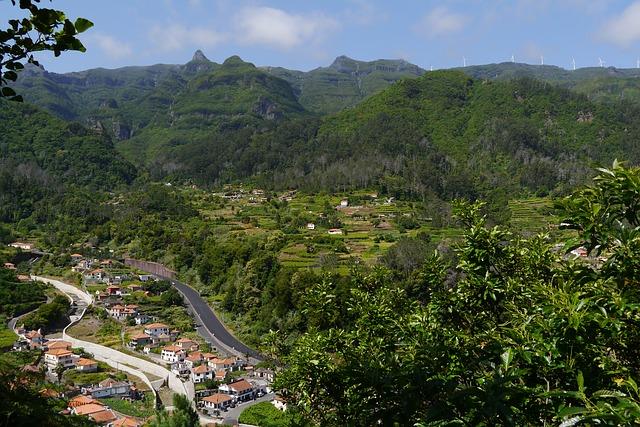 The mountains in this area of Portugal are spotted with broken and dusty factories that were once the hub of a vibrant textile industry. The yarns, felts and array of textiles produced here were some of the best in the world. Walk around the outside of these places and there are still small heaps of wools swirling in the wind. Inside, the looms are things of utter beauty, standing ghost like and alone in these cavernous buildings. Close your eyes and perhaps you can still hear the clatter and the chatter of the warp and weft coming together.

Modernity marched all over the landscape when nylons and polyester became cheaper and a little more versatile than traditional fabrics. Cork trees had provided the world with an air tight cork seal for a range of alcoholic beverages but now are largely replaced, again, with manmade plastics that are difficult to recycle, and perfect for choking a variety of wildlife. Highly skilled staff that manned the looms and cut the cork were laid off. Unemployment remains the norm in this poor area.

We found an old farm and mill house that was a huge renovation project. The previous owners had used it as a summer get away, and it had not really changed in eighty years apart from acquiring a new roof. The basement or adega had a dirt floor and a big concrete tank for crushing the grapes to make the annual supply of wine; such features were typical for this area. The house was beautifully quirky with a mill race at the side which powered six pairs of hand crafted granite grinding stones, each a metre wide, that would have ground wheat and corn for the local community. 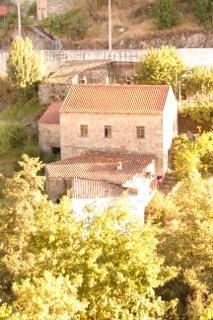 We moved in, full of ideas for an ethical renovation reusing as much as we possibly could; some internal walls came down and the wood was riddled with worms but burned just fine on our wood burner. The plaster and some stone became hard core for an outside seating area. We had decided that large engineered cork tiles would make excellent flooring, providing extra insulation from the summer’s searing heat and winter’s numbing cold, whilst also bringing softness to the granite building. The idea of giving new life to an old and nearly forgotten building pleased us. Like 98% of renovation projects everything took longer than we thought and, despite my partner being so skilled that he did most of the work himself, we still went over budget. We got by on bits of money trickling in, but were waiting for payment from a previous project before we could go any further.

Four years into the project, we were both utterly sick of living on a building site and moving from one space to another as the house slowly took shape. The promised payment didn’t come through, and we were forced to re-think our plans quickly. The house needed to be finished so that we could start living our lives again.

We said goodbye to the gorgeous ethical and innovative flooring was that priced at 2k, and were a little miserably having to settle for a pine laminate. I was chatting to a friend at an exhibition opening and he mentioned that he had a huge pile of previously used oak flooring sitting in his attic. We picked it up the following day for a cost of €150. There was plenty to do our lounge area, and of course the off cuts and damaged pieces became fuel for our fire. It looks wonderful. 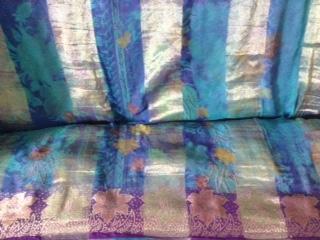 I got out the tacked up curtains that I had ferreted away all those years ago and discovered that they were a perfect fit (off they went to a seamstress for completion), whilst the ugly blind became a thing of beauty with the help of some fabric paints and a little courage. The one opulent tie back now chimes a bell when tugged at dinner time. I have made a throw for an unsightly sofa from a duvet cover that was beginning to wear, another hole appearing with every wash. I used a vintage sari that I found in a second hand emporium as backing for the cover. It makes me smile every time I see it! I suddenly have a piece of India in my study and I wonder whether it was worn by a beautiful young woman about to meet her lover during the heat and dust of a dance.

There suddenly appeared to be space for all the prints, paintings and frames that I collected over the years. A couple of prints did not fit anything I had, so I made a couple of rustic frames from strips of eucalyptus bark that the a tree in the garden sheds like an ill-fitting skin every year. 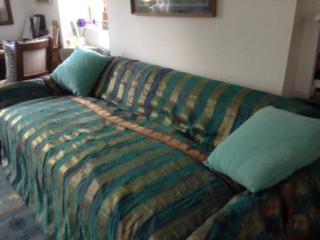 Some people may think that my situation sounds unfortunate after living an affluent London life which included a great salary and the luxury of being able to buy things whenever I wanted. In truth, it is liberating. Our home is full of unique things that have been created out of love and care rather than just pulled from a shelf in a store.

Another Way of Thinking…

We have a lot of land here, some has been cultivated and the rest is a haven for bees and butterflies and all sorts of wildlife. All those cardboard boxes that housed our belongings whilst they we stored in the garage for seven years have become a mulch and weed repellent used at at the end of the growing season. The raised beds are covered in a layer of compost and then a layer of cardboard, then left to slumber over winter, and uncovered again in April when they are fully rejuvenated and weed free.

I am still guilty of collecting stuff that I like the look of and may be perfect for one of my art projects. We bought an amount ceramic vases, bowls and containers that were rejected from a nearby factory. I have upcycled these by painting them. Each one is unique, as are the flights of fancy strange birds that I make. These started off by upcycling plastic bottles tops, string and broken jewellery. I am making some money from these projects which feels infinitely rewarding.

It is not about being poor, mean or thrifty. It is simply a different way of thinking about all the stuff we humans produce.

For a future recycling project, one of the specialists I saw last year mentioned the option of a lung transplant. And that will be another story.

Fiona is a contributor in our Write for Us series, and lives in the mountains with her partner, four dogs and two cats. Occasionally, missing the wealth of culture found in cities, she heads back to London or Porto to get her fix of theatre and music. Influences for her writing and art work come from the furore of the city and the tranquility of nature.

Nest Boxes: What Are They And Which Ones Are Best?

‘Britain’s Top Dog Breed’, or ‘Most Overlooked At The Shelter’?