Wayne Hemingway is one of the UK’s greatest and most well-known advocates for valuing the timeless things in life, so for this year’s National Secondhand Day on Preloved, the leading designer and thrifty champion shares some of his thoughts on vintage, thrifty living and kicking off a career by snapping up secondhand bargains. 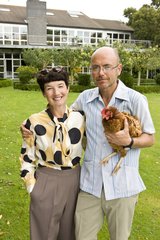 Along with his wife, Gerardine, Wayne’s career in sustainable fashion, design and retail began on a humble market stall in London’s Camden Market at the beginning of the 1980s. “Gerardine sold some of the clothes she’d made for herself. I had always had a good eye for clothes and so I sold some of my secondhand ones. On the Saturday we made £100. We came back the next day and took £180. Within a year we had 16 stalls and were selling second-hand clothing and footwear that we sourced from all over the country and abroad.”

Over thirty years later, he believes that the UK’s continuing and growing interest in thrift, secondhand and vintage is about more than simply saving money or making a lifestyle choice.

“it’s about enacting a real and positive change in the way that society acts and consumes. The generation coming through now is the first that is worse-off than their parents, yet we continue with a culture of mass consumption – having to buy the latest gadget, the biggest TV, new clothes every six months, often with the help of credit.”

It’s an economic landscape that Wayne believes is slowly making people ask wider questions about how they want to live their lives.

“Last year’s Festival of Thrift (which takes place again this September) was all about demonstrating to this generation, and many generations to come, that there are ways to enjoy life without spending and borrowing on the scale of the past decades. Nevertheless we’re still up against a culture where spending a small fortune on a bag covered in the logo of a French brand and coveting your next door neighbour’s brand new company car is still prevalent. Few would share my absolute pride and delight in the family ToyotaPrius approaching 200,000 miles.”

“Thrift, vintage and secondhand are not flash-in-the-pan phenomena, but a genuine response to the economy and the state of the world that is creaking under mass-consumption. People want to actively learn how to save money and the planet for a future generation.”

“Life isn’t about bling in the form of flash cars, big houses and overpriced clothes; it’s about values, about getting stuck in and enjoying creating the good things in life. Those good things can still feature great design and creativity.”

“The Festival of Thrift was about having fun, getting more bang for your buck and working with others to get the best out of life without getting into serious debt.”

5 ways to #PimpYourPumpkin this Halloween

What is Yoti? How To Use It