With their bullet-like sleek and shiny aluminium bodies, glinting in the sunshine, classic Airstream caravans have become icons of the open road. The recreational vehicles were originally built in the Los Angeles backyard of company founder, Wally Byam, later moving to Ohioand then California. While the slivery monocoque vans are a relatively rare sight on UKshores, they always turn enviable heads when spotted. We caught up with lucky Airstream owners Alice and Tim Lees to find out about their much-loved 1962 model, now at home in Derbyshire.

Tell us about your Airstream.

Our airstream is a 1962 Californian built Airstream Tradewind Landyacht. We bought it privately from the internet from The Black Hills in South Dakotafrom a man called David Allard. He had it sitting in his back yard for a few years and was very surprised that someone in Englandwas interested! We organised it to be towed from there to Galvaston,Texas then on to Southampton!

Where was it built?

It was built in the original Airstream factory in California, which means it has a light wood interior. We did some research and found out that the original owners, Bert and Lollete Thomson, used it extensively including a visit to Alaska. They also attended some of the legendary Wally Byam Airstream meets.

What condition was it in when you bought it?

When we got it, the Airstream was extremely dusty as it had been through tornados and -27 temperatures. It needed a really good clean. Unfortunately on the boat it had become damaged on the roof and a window. The Airstream had to travel to The Cotswolds to have 14ft of the roof replaced and the window frame repaired. We decided to also have it polished to a mirror finish which takes 200 hours! We have sympathetically reupholstered the interior including new curtains.

What is the appeal of the Aistream?

We are passionate about Airstreams because although it is over 50 years old we believe they look quite futuristic. They always attract attention and are brilliantly designed. It seems to blend in where ever it is placed as it reflects its surroundings, unlike a white caravan. The old, original Airstreams are a lot shinier than the ones that are made today.

How comfortable are they for camping?

They are great to sleep in, not dissimilar to a modern caravan. The Airstream sleeps 4 in two full-sized single beds and a pull out ‘gaucho’. It has a large vintage American fridge with a freezer compartment or ‘ice box’. There’s a good sized kitchen where meals can be prepared. It has a bathroom with a bath/shower and a porcelain toilet. It is our next project to get this up and running. We find the Airstream very roomy as it has a defined seating area, kitchen and bedroom. 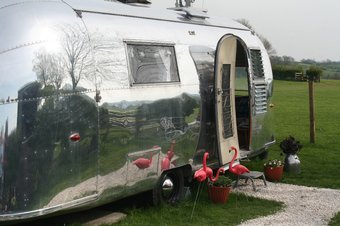 Why are Airstreams so sought-after now?

We think it is popular now as there seems to be a vintage revival. There is a lot of interest in mid-Century design icons. Within America there is an increasing demand for Airstreams of this period.

What are the challenges of owning one?

The challenges of owning an Airstream are that the majority of parts are obsolete and have to be sourced from the USA. For example, the wind blew our door shut with a slam which broke the lock and we had to source a new old stock replacement at the cost of £400 !

What kind of money would you expect to pay for one?

The cost of an Airstream if bought in this country is about £12,000 upwards. If you purchase it yourself from the USA you need to bear in mind that there are shipping costs and import taxes and insurances to pay.

What do buyers need to consider?

If someone is considering buying one they need to think about their towing vehicle as they can be heavier than most European cars. As they were hand-built they need to consider what layout would suit them best and they vary.

Is there an Airstream scene in the UK?

There is an Airstream scene. There is a UK Airstreamers organisation that has regular meets throughout the year and offers advice through their forum.

How do you use your Airstream?

We really enjoy our Airstream as a young family and have it situated on a beautiful farm location in the Peak District. We feel very lucky to use it as a holiday retreat. It is now offered as a holiday rental. Feedback so far has been extremely positive. We are filling up fast for this summer! Further information can be found at Airstream Retro Holiday. We also have a Facebook page where we sell retro and vintage items as well as posting regular pictures of all the fun at the airstream!

Save Your Favourites on Preloved!

Bathroom Ideas on a Budget

What to Do in the Garden in July