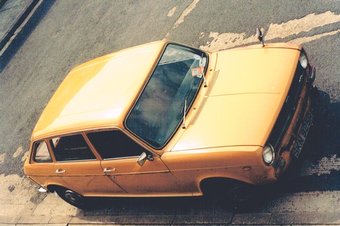 Sarah was a friend of a friend and I had offered her a lift home, hoping to impress. She clearly loved the Austin Maxi – she stroked the brown velour seats and enjoyed the sumptuous ride as I eased the vinyl bound steering wheel  left and right to follow the winds of the country lane. We both watched as something overtook us – not a car but a wheel with a shiny chrome hubcap. Then, as the car glided gently into the adjacent ditch, we realised that the wheel had previously belonged to the Maxi and had made a bid for freedom. I walked Sarah to the nearby station and went off to hunt for a phone box to call the RAC.

I bought the Maxi in 1988 out of the local paper (this was 10 years before Preloved existed!) for the bargain-of-a-lifetime sum of only £35. It had suffered a prang to the nearside front wing which was now so crumpled that the headlight pointed forlornly down to the floor. I tied it to a gate post and put it in reverse, managing to bring it back to more or less the right shape. Looking back at the photo now, it also had other issues that I had forgotten about – not sure what happened to the chrome trim along the side, nor the front bumper for that matter.

Bodywork aside, this was a thing of beauty, a real masterpiece of beige and brown. It was equipped with 4 full size armchairs which reclined to convert into a large bed. Ride was luxurious with its state of the art  hydrolastic suspension. I had gaffer taped a cassette player to the shelf under the dashboard which allowed me to play my Simply Red tape on continuous loop through the single speaker on top of the dashboard. It was a 1750 HL which meant it had twin carburettors allowing the engine to pump out a full 91 bhp. This would give a Ford Escort XR3 a run for its money which surprised a few people and certainly made me the owner of the fastest living room in Essex.

Of course it wasn’t without its problems. Motorway runs would often be interrupted by an unexplained 15 second loss of power and unfortunately that wasn’t the only time a wheel fell off.  The car finally met a sticky end involving a wet road and a corner, two things that never got on well together in the Maxi.

The Austin Maxi was produced during a dark period of British automotive history and lacked some of the quirky character of its contemporaries the Allegro and Princess. This lead to the Maxi becoming a rare site on UK roads with only 345 still in existence.  If you can find one today, a good example could cost you anything up to £3,000 but you will have yourself a comfortable and practical slice of British motoring history.

Ian Buzer started Preloved in 1998 as a place for local people to buy and sell all things second hand. He's been the proud owner of many British classics, including an Austin Maxi, Austin Mini, Triumph TR7, Rover P6 V8 and more recently a Caterham 7.

We’re in Search of Pupdates!

Selling Your Bike? Here’s 5 Ways To Prep It