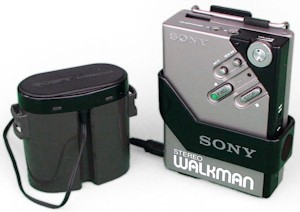 Rewind time and you quickly see how technology is speeding up. And as we stampede to buy the next smartphone, tablet and laptop as soon as they hit the market, we leave behind a trail of gadgets and gizmos that the manufacturers tell us have reached the end of their useful lives, to be forever logged them off into redundant obscurity.

Gadgets that once seemed destined to be mere footnotes in the history of technological development are now becoming increasingly sought after by a growing retro community who believe they still have an intrinsic value in our throwaway society. They recognise that just as there would be no Lady Gaga without Madonna, these eighties’ classics are historical artefacts with a direct ancestral lineage to today’s iPads, Androids, eReaders and next generation consoles.

Chunky and clunky they may look today, but they are also representatives of the many mavericks and pioneers who paved the way for today’s global tech monoliths to take, tinker and refine them to meet modern consumer demands.

From the Walkman to the Sinclair ZX81 these surviving examples of retro techno are nostalgic throwbacks to a time when consuming music and games meant the odd crash, reboot, the occasional tangled cassette and a little more patience. But they are also attracting ardent fans who are rediscovering the pixelated pleasures they can still offer today.

We take a look back to the future of technology that has never really gone away by pressing play on the Walkman!

Music on the Go

In the UK, the ubiquitous Sony Walkman (or Stowaway as it was originally called) quickly became synonymous with joggers, teenagers trudging to school and the unlikely figure of the Peter Pan of Pop, Cliff Richard, in his 1981 hit ‘Wired for Sound‘, which featured him wearing a Walkman while bravely roller skating around Milton Keynes with a bevy of lycra clad skaters. The Walkman represented freedom and entertainment on the go. Since its first appearance as the Walkman TPS-L2 in 1979 and despite having no recording function, it soon became an icon of the era, with the word ‘Walkman’ entering the Oxford English Dictionary in 1986. It also helped to trigger the new craze for aerobics and by the time Sony eventually ceased production in 2010 due to falling sales an estimated 200 million of the portable cassette players had been sold.

Today the Sony Walkman has been added to the Design Museum’s collection (whether they also have an accompanying pencil to rewind the cassette tape that intermittently spooled out we’re not sure!). 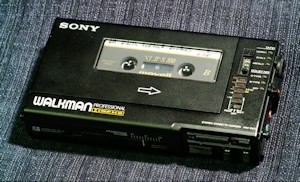 Question: When did you start collecting Walkmans?
Answer:

About ten years ago when they were cheap and plentiful. Finding good examples of the early models is now much more difficult than it was when I started.

Question: Why do you collect them and what is their appeal to you?
Answer:

I appreciate the quality of the design, the engineering and the performance. The Japanese have a talent of making irresistible miniature versions of familiar objects and the Walkman is a fine example of this. They are also very useful, everyone likes music and the original and best way to enjoy it wherever you like is the Sony Walkman.

Question: How big is your collection?
Answer:

About 50 Walkmans but I have other Sony products too, such as Trinitron TV sets, CD players and the larger audio models.

Question: Why you believe the Walkman is such a collectors' item?
Answer:

Many reasons. They are beautiful things in their own right, they recall happy memories for people and they perform a function which isn’t necessarily possible with the latest alternatives.

Question: How would you compare Walkmans to iPods?
Answer:

They are very different things, an iPod is a part of the scheme that encourages you to spend money at the iTunes store, a Walkman is a proper audio product in its own right. In audio quality terms the iPod is still quite some way behind the best Walkmans.

Question: What's the most valuable model in your collection and why?
Answer:

Probably the WM-D6C Walkman Pro, even though they are not rare by any means a good one now costs as much as they did when they were new. The reason is that this model is still the best available portable audio source and the portable recorder of choice for many professional applications. Fortunately the values of the more mainstream models are still quite reasonable, although the days of picking them up for pocket money seem to be long gone.

Don’t feel that you have to buy the important “classic” models first, start with a few of the cheaper, more recent versions and have fun using them. Learn how to do simple repairs yourself so that you can make the best use of what you find. Buy a decent full-sized cassette recorder and some quality blank tapes so that you can make your own cassettes and listen to your own choice of music, learn how tape recording works so that you can make the best recordings possible. Do some background reading on related subjects like the 80s music scene or Japanese culture, then you will better understand how the Walkman fits into life.

Question: What else would you say about Walkman collecting?
Answer:

Sony personal cassette player with Mega Bass, along with belt clip and headphones to make you look a real eighties hipster.

Philips Walkman and selection of cassettes to get your movin’ and groovin’.

Sony Walkman and Aiwa Walkman – choice of two, so take your pick of portables!

Our Valentine’s Giveaway With Secretly Secondhand

Not for Profit Affordable Housing: Rebuilt4U