A Short History of the Typewriter

In an age of laptop, desktop and tablet domination, it is easy to forget that, not that long ago, typewriters were the dominant way most texts was produced; typos were not easily rectified, and ribbons needed to be continually replaced. Typewriters are no longer a necessity in the Western world, yet in countries such as India, the typewriter is still a prevalent way of producing script.

Typewriters date back to 1714, and became increasingly popular until they were fundamental to the production of nearly all important and official documentation by the 1860’s. The price of typewriters was high during the 19th century and attempts were made to produce cheaper models. The mechanic typewriter became popular and accessible in the mid 1990’s, replacing its mechanical predecessor. These typewriters included an improved ink ribbon to allow the letters to appear more clearly on the page, proportional spacing for different sized characters, and the ability to change the font type. They appealed to office workers and students, and allowed documents to be produced more efficiently than on manual typewriters.

From vintage Remingtons to electric Olympias, there are an abundance of typewriters advertised on Preloved. They make stunning vintage ornaments or quirky retro gifts. Here are some of the Preloved team’s top typewriter picks currently for sale on the site. 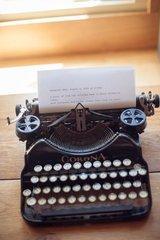 This Retro Adler Gabriele 25 Portable typewriter has recently been listed on the Preloved site. It’s in full working condition and is even equipt with an instruction manual… just in case you’ve forgotten how to use one after all those years.

We love classic vintage Imperial typewriters! This one is in excellent conditionand advertised for just £45! Bargain!

This vintage Olivetti Electric Typewriter is advertised for only £20. Olivetti is an Italian company that was founded in 1908 by Camillo Olivetti. They produced electronic computers, calculators, and of course, typewriters! 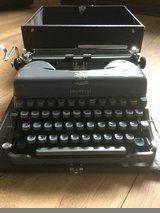 What other kinds of vintage and retro present ideas can you find on Preloved? Let us know on the #ThriftyPrelovers hashtag!

Win the Trip of a Lifetime to New York for 2

Gifts in a Jar