Clive Palmer from Somerset in the south-west of England has been a member of Preloved since April 2011 and is currently selling an unusualfairground organ from the 1920s. We caught up with Clive to find out a little more about this unique vintage item and its history.

When did you buy the organ and who from?

I bought the organ in 2006 from a well-known TV producer who had bought it in a poor condition in Holland and brought it back to the UK. It was completely restored by two of the world’s top organ restorers, Kevin Meayers and Paul Davies at the Amersham Fair Organ Museum. 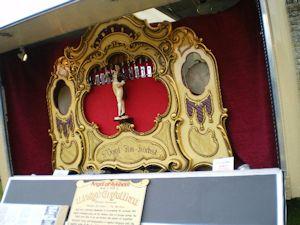 How unusual or rare is it?

The organ is a very rare instrument, which was built by the renowned firm of H Voigt of Hochst in Germany. Voigts were better known for their large church organs and only produced a few fair organs, which are regarded of the highest quality.

How much restoration work has been done on the instrument?

It is very original and has never been substantially altered, as most others have in the past. Many have gone through lots of owners who have changed them to their own preferences. This organ has 226 pipes and a most unusual Ocarina stop. An Ocarina was a small hand flute type instrument that was popular before the last war.

What do you know about its history?

Its first owner was a travelling showman who lived in Germany and travelled it widely throughout Europe. It was later sold to another showman in north Holland and, from him, to a private museum owned by the late Kees Adriaansen at Tilburg. It was bought to England in 2003.

It must have a lovely sound, describe it

It has a rich and strong voice, as per most German organs. It is a charming instrument with a strong, big output.

How do you move it around?

It’s small enough to be towed in a trailer by a VW Transporter type van. The organ, trailer and music books weigh in the region of two tonnes.

How does it actually play music?

There are many concertina type books which play the organ on a punched book system. There are hours of music, ranging from traditional tunes of the 1920s when the organ was built, until the present, including ‘The Phantom of the Opera’ and ‘Memories’. Also included in the organ is a glockenspiel and the percussion is provided by a bass and a snare drum.

How do you use the organ?

I have used it at ‘Victorian’ evenings and local fetes. I’ve never charged, although most owners do. It’s a good medium for raising funds for local causes.

How do people react to it?

Some people are quite overcome by its music and often the audience will dance in front of the instrument.

You never really own such an item, it’s more like a stewardship of honour as it’s almost a living thing which, hopefully, will be passed on to another honoured person to care for it. I would like its new steward to cherish and care for it for many future generations. It likes long journeys and a warm-up once a month.

How is it powered and does it require much maintenance?

It is powered by mains 240-volt electricity or a generator. The trailer requires the usual checks and greasing on its two axels, and the organ has four or five oiling points. The tow bar needs regular safety checks. It has an electrical test certificate, which needs to be checked every three years. It has given me no trouble in the seven years of my ownership and I am told that it probably plays as well now as when it was new.

Why are you selling the organ?

I have loved the sounds and workings of fair organs since I was a child, but now in my seventies I need to find somewhere smaller and a new owner for the instrument is, unfortunately, all part of downsizing.

Preloved People Write for Us

Catch Up In The Kitchen With… Pete!

Get crafty and make a wreath from a coat hanger!

The Preloved App Has Arrived! #PrelovedOnTheGo