Buying a puppy? ‘Justice For Reggie’ Are Here To Help

Thinking Of Buying A Puppy?

Buying a puppy is such a huge responsibility. It’s more than taking them for walks and cleaning up their mess. Before purchasing your new furry friend, you need to make sure you are buying from a reputable breeder, asking all the right questions, and carrying out all the correct checks. When buying a puppy there is so much you need to know.

Reggie: The Little Pup Behind The Big Cause

One couple thought they had done everything right before buying their puppy, Reggie. Little did they know that Reggie was imported, he came from a puppy farm, he wasn’t being sold by a reputable seller like the advert had suggested.

Richard, the buyer, thought he had found the perfect puppy on what he thought was a reputable online selling site. He thought he had fully researched everything he needed to know before buying the puppy. He wasn’t expecting the heart-break and pain they endured shortly after.

Richard bought little Reggie, a Fox Red Labrador puppy, in December 2020 as a surprise for his partner and son. He had contacted the seller using the details on the website. All questions Richard asked were answered and a visit was arranged, at an address 6 miles away from the one noted on the advert.

After spending time with the seller and the puppies, Richard couldn’t leave little Reggie after the attention they were both giving each other. Richard did ask to see the pup’s mum but was told by the seller that he had just moved and the mum would have been upset with the separation, he brought the puppies alone.

Everyone loved Reggie from the minute he got through the door, little Reggie loved his new family just as much.  After only 3 hours, Reggie fell ill with diarrhoea.  You can imagine the fear the family were all feeling.  Reggie had deteriorated through the night.  The following morning he was suffering with both diarrhoea and vomiting which became progressively worse.

Doing All They Can To Save Their New Family Member

Richard’s partner, Alicia rang the vets and described Reggie’s condition. The Vet asked for Reggie to be rushed straight in for treatment and investigating. While Reggie was at the vets he was tested for Parvovirus which came back positive. The Vet put Reggie straight onto an IV drip and had to insert a gastric tube as he wouldn’t keep anything down. 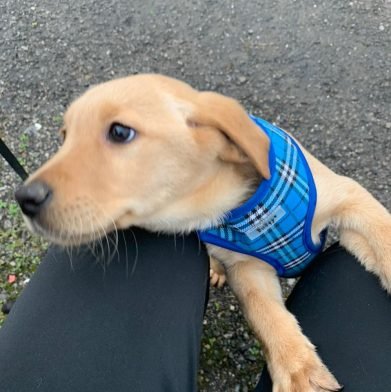 You can imagine the heartache the family were going through. Parvovirus is highly contagious, transmitted through direct contact with an infected dog, and has deadly consequences. Puppies are exposed to this every time they sniff, lick or consume infected faeces. Parvovirus attacks the small intestine and stomach and has been known to effect bone marrow and also the heart.

A Mountain To Climb

14 hours of having a new puppy, and the family have this mountain to climb to save their new family member, Reggie. It was an emotional rollercoaster and the vets were in constant contact. Reggie was having everything possible to help get him through this. At one stage, Richard and Alicia were told Reggie had a 20% chance of surviving. On day three the vet called and asked Richard and Alicia to come and see little Reggie, they were both told the only thing they can do is a blood transfusion but as Reggie had no white blood cells the Vet advised them against the transfusion.

Alicia said on seeing Reggie “he’s alive but looks dead”. Alicia is a nurse and never felt so helpless in her life, the beautiful baby she has wanted for 7 years and she couldn’t do anything to save him. The guilt she felt was unbearable. Sadly, after a couple of days fighting, Richard and Alicia had to make the hardest choice ever. They couldn’t keep putting little Reggie through all the vet procedures causing pain and discomfort, they made the hardest decision they ever could, to have little Reggie put to sleep.

Richard phoned the seller while at the Vets to let him know about little Reggie, the seller said he would meet him but never turned up. The seller was never heard from again, blocking all contact from Richard. Richard and Alicia informed local authorities who advised “it’s a regular occurrence with Irish gang’s moving nationwide going from house to house doing it with no care or consideration for the pups”.

Richard didn’t have it in him to walk away. The first look at Reggie and he had puppy eyes.

Once Richard had taken ownership of Reggie, he learnt that the pup had not been chipped, vaccinated, wormed and flead, as he’d been informed. This was all lies from the seller.  The paper work that was received, all fake and the microchip information was for a different chip number, that was not Reggie’s.

The Justice For Reggie Organisation Is Born

Alicia shared her frustration on a Facebook post about the tragic loss of Reggie, and soon had the idea to expand on this. It was shortly after, on Christmas Eve 2020, that Justice For Reggie was set up.  Initially, the group had only three volunteers, Alicia, Richard, and Ann; Three people who are dedicated to making sure Reggie’s pain and suffering was not in vain and making a lasting promise to Reggie to fight for changes in his name. They set up the Campaign to spread awareness of the illegal puppy trade, including puppy farming and to educate people on how these people lie. They still had no idea about Puppy Farming but wanted to get word out to little Reggie’s sibling’s so their families didn’t end with the heart ache they did.

The followers started to build and the family were really humbled by the support from all followers, with messages coming in to help and volunteer. The help was amazing; they had researchers, web designers and people who brought various skills to the Campaign. In this short time the Campaign has gone from strength to strength. We now have support from MP’s in England, Wales and Ireland, and hold regular meetings with various Local Authorities, Charities, Police Commissioners and the Selling Sites. We have worked closely with the RSPCA when followers have contacted us with their own stories of heart break, similar to Reggie’s story. They are helping as a collective voice to seek urgent changes to the laws on the illegal trade in puppies.

Our aim is to change current legislation around animal sales; minimum pet age of 6 months before importation into England, Higher penalties for puppy farming and all breeders to be licensed with regular inspections. 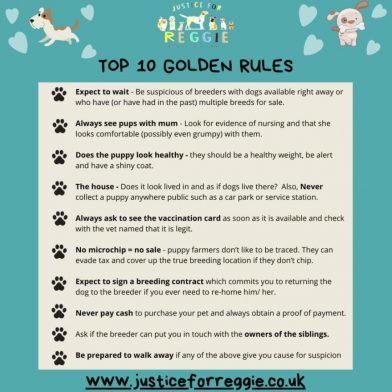 Reggie was shown so much unconditional love and attention for the 3 days he was in Alicia and Richard’s family, more so than he had been shown in his 12 weeks  of his life with the illegal sellers.  The emotional hurt that it brings, knowing the suffering Reggie went through in his very short 12 weeks of life with the illegal seller will live with his family forever.  Therefor it was decided to make a change and introduce the Justice for Reggie campaign.  Unfortunately Reggie is only one out of thousands that has fallen victim to these criminals, with the support from MP’s, local councils and with the education of the public we hope to make a change and Reggie will carry a legacy known as Reggie’s Law.

Although Lucy’s Law is legislation not everyone is aware of the checks needed prior to purchasing a new puppy, therefor we urge you to always follow guidance and checklists provided by current selling sites, if a box is not ticked then walk away, although this can be hard.  We urge you to report the breeder to your local authority, RSPCA and Animal protection services who will do their upmost to protect the welfare of these animals.

For more information on Justice For Reggie:

A Statement From Preloved

Here at Preloved, we will always put animal welfare first. That’s why we’re proud to be working with the amazing team at Justice For Reggie.
With our shared goal of improving regulations and pet safety in the UK, we look forward to collaborating with this incredible group of volunteers on a number of campaigns in the near future. 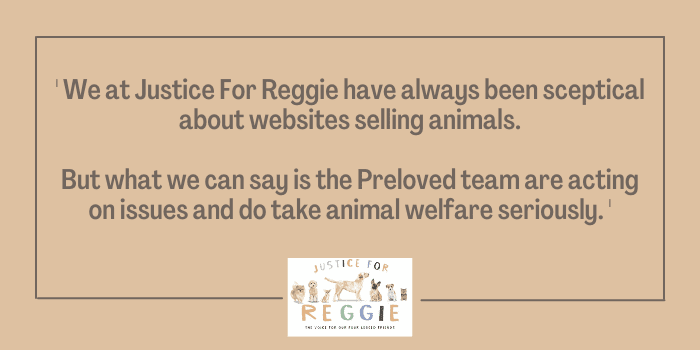 Similar Preloved Articles:
Pet Buying Checklist | Finding A Responsible Seller
Worried About Pet Scams? Here’s What You Need To Know
A Scammed Buyer’s Story: The 12 Warning Signs
Who’s The Person Behind The Pet?
Buying Or Selling A Dog | Do You Know The Lockdown Rules?
Has The Pandemic Triggered A Pet Rehoming Crisis?
Change The Tale With Our Friends At Dogs Trust

Working towards creating a change in puppy selling, and to introduce regulations for how we trade and treat living animals.

7 DIY Ideas To Pamper Your Cat