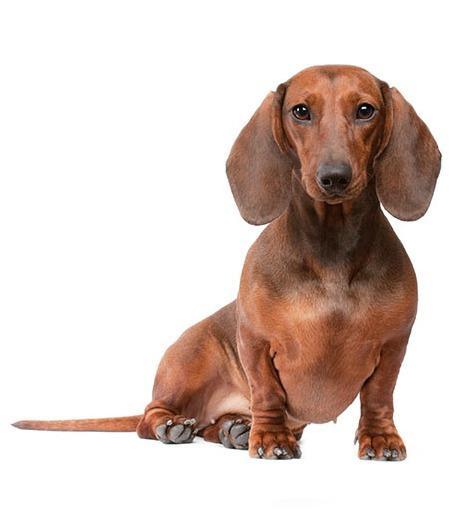 The Dachshund or ‘Sausage Dog’ is small dog breed with German origins. A breed well known for having shorter legs and a longer body, this playful pooch is also renowned for having a bold personality! Dachshunds are very popular as pets and in the UK come in six varieties, two sizes – Standard (20-26 lbs) and Miniature (10-11lbs) – and three coats – Smooth, Long and Wire Haired.  They are loyal companions and generally make good family pets.

History of the Dachshund

The origins of the Dachshund dog breed can be traced back to working dogs that were used to go in to the ground after animals such as badgers, foxes and rabbits. Although primarily kept as pets today, they are sometimes still used as working dogs, for example tracking fallen deer and there is an active “working” community in the UK.

Appearance of the Dachshund

This small dog breed is described as moderately long and low, with a well-muscled body and a bold, defiant carriage of head and intelligent expression.

Smooth-haired Dachshunds are the “traditionally recognised” Dachshund. Their coats are dense, short, smooth and shiny; requiring little maintenance. Most common colours are Black and Tan, Red, Chocolate/Tan and Dapple.

Long-haired Dachshunds are the “glamour kids” whose coats are soft and straight. Their long coat features feathering on the underparts, ears, behind the legs and the tail where it forms a flag. Long haired Dachshunds require regular grooming. Most common colours are Black and Tan, Red (ranging from Cream to Shaded Red), Brindle (Tiger-striped), Chocolate/Tan and Silver Dapple.

Wire-haired Dachshunds are the “rugged workmen” of the breed and have a short, harsh coat with a dense undercoat. There is a beard on the chin, the eyebrows are bushy, but hair on the ears is almost smooth. Wire coat texture varies from “pin wire” (very harsh) to “hairy” (longer and less harsh). A Wire coat typically will need stripping (never clipping) two or three times a year, depending on its texture. Most common colours for Wire Haired Dachshund’s are Brindle – where the individual hairs are striped (sometimes called Wild Boar) and Red. Chocolate/Tan and Dapple also occurs.

When buying a Dachshund be awareof people selling “rare coloured” Dachshund breeds. Generally, anyone telling you a Dachshund puppy has a rare colour is either ill-informed, or they are a commercial breeder. 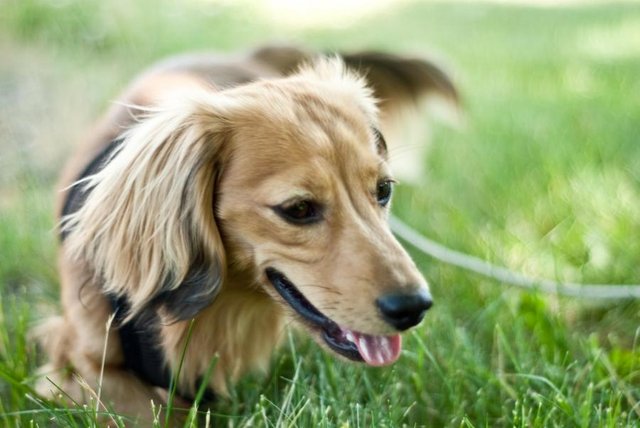 Temperament of the Dachshund

Dachshunds should be bold and outgoing.  The Breed Standard describes them as being “Faithful, versatile and good tempered”.  It also says they should be “Intelligent, lively, courageous to the point of rashness, obedient”.  They can be a bit intimidated by other breeds and larger dogs, so it is important to ensure they are well socialised right from a young age.  As a generalisation, the Wire Haired Dachshund is the most extroverted and active, Standard Long Haired Dachshund’s are the most laid-back, and the Standard Smooth Haired Dachshund is perhaps more of a “one person” or “one family” dog breed.

Standard Dachshunds are more robust and therefore probably better for families with young children. All the Miniature Dachshunds make ideal pets for someone who is less active and who wants a small but affectionate companion.

In general, they can be a noisy dog breed and they can become persistent barkers, so you do have to work hard with them as puppies to ensure they know when to be quiet.

Health considerations for the Dachshund

Dachshunds generally suffer few health problems providing they are kept well exercised and fed a healthy, balanced diet. As with most dog breeds, obesity can be a problem if they are fed too much and do not get enough exercise. On average, they live to around 12 years old.  Miniature Dachshund dogs tend to live longer than Standard Dachshunds.

Because they are a “dwarf breed” there is a greater risk of slipped disk problems than in a longer-legged dog. However, such problems are best avoided by keeping the dog fit and not allowing it to become overweight or to run up and down stairs, which clearly will put extra stress on their back. Good breeders monitor their breeding programme and do not breed from dogs with a history of back problems. Some Dachshund dog breeders have introduced shorter back, longer on the leg types, usually from Europe and Scandinavia.

Breeding stock for all varieties of Miniature Dachshunds should be DNA tested for the cord1 PRA mutation which is an inherited condition causing degeneration of the retina and potentially leading to blindness. For Miniature Wirehaired Dachshunds, breeding stock should also be DNA tested for Lafora, a form of late onset epilepsy that can also cause blindness and dementia. If you are considering buying you should ask the breeder whether both the parents have been DNA tested and ask to see the results. Only purchase a puppy if at least one of the parents has been DNA tested “normal“ (Clear) for cord1 (and Lafora in Mini Wirehairs) . Avoid buying a puppy from a breeder who does not know the DNA cord-1 status of the Sire and Dam of the puppy (and Lafora in Mini Wirehairs). You can check health results of any Kennel Club registered dog via the Kennel Club Health Test Results Finder service.

Always consult a Vet if you have any concerns about a puppy you intend to purchase, or health problems with an older dog.  Breed Club Secretaries will also be able to provide up-to-date advice on any current or emerging health concerns in any of the Dachshund breeds. Visit the Dachshund Breed Council’s health website for the latest information:www.dachshundhealth.org.uk 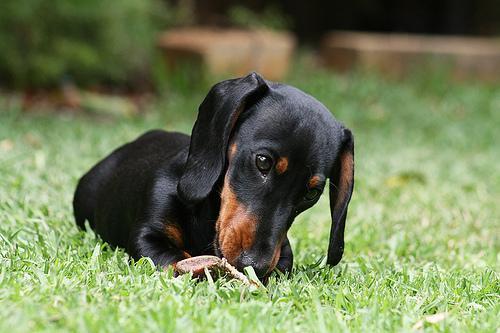 How best to care for a Dachshund

Dachshunds are active dogs and will take as much exercise as you can give them once they are fully mature (over 12 months old). They are, however, just as happy curled up on your lap, snoozing. They are loyal companions and make good family pets, but they can be noisy. They are not noted for their obedience but, with patience and persistence by the owner, they can be trained. However, they are Hounds and when they are off the lead, if they get a scent, they can “go deaf” when it suits them.

Long and Wire Dachshunds will need regular grooming (at least weekly) using a bristle brush and wide-toothed metal comb. Pay particular attention to the longer hairs on the legs (and a Wire’s beard) to ensure there are no tangles. Wire Haired Dachshunds have a double coat and do not moult like other dogs. There is a longer, harsh top coat with a dense undercoat. 2-3 times a year the long, dead, top coat will need to be stripped out to allow a new top coat to grow in. Do not clipper a Wire coat otherwise it will become soft and fluffy.

Download a FREE e-book “Buying and owning a Dachshund” produced by the Dachshund Breed Council: www.dachshundbreedcouncil.org.uk

We’re very lucky not to have a significant rescue/re-homing problem and our Breed Rescue organisation always has a waiting list of people who would like to re-home dogs. Visitwww.dachshundrescue.org.uk

The Dachshund Breed Council represents the UK's Breed Clubs and is the definitive source of information for Dachshund owners in the UK. For advice on buying and owning a Dachshund,download a free 44 page e-book at: www.dachshundbreedcouncil.org.uk

Tips For Your Summer Work Wardrobe

Tips on How to Reduce Your Food Waste at Home

Cash in with Cool Classic Cars

The Second Lockdown: How Preloved Can Help You