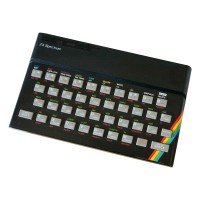 Images – The Centre for Computing History

A little while back we looked at the Sony Walkman’s impact on music and now we’re turning our attention to the realm of home computing to explore the continuing appeal of the early models for techno purists.

Battle on the Home Front

Sounding like something straight out of The Jetsons, with the launch of the ZX Spectrum in 1980, priced at less than £100, inventor Clive Sinclair created a microprocessing computer with an affordability that brought computing out from purely a business realm into UK homes.

The battle for control of the UK marketplace gathered increased pace when the BBC awarded Sinclair’s rival, Acorn, the contract to produce the broadcaster’s own BBC Micro. Undaunted, Sinclair’s plucky riposte was the hugely successful and cheaper ZX81, which went on to sell over 1.5 million units. As games developers quickly realised the potential of the burgeoning home market it signalled the start of millions of adolescent boys loading up strange alien sounding cassettes to get their fix of bleepy games like Manic Miner and Jet Set Willy.

The age of home computing in the UK had truly arrived, with other names such as Alan Sugar’s Amstrad, Dragon 32 and Jupiter Ace also entering the domestic fray, as well as taking on international interlopers, such as Commodore.

It was all a world away from the future envisaged by Thomas Watson, Chairman of IBM who said in 1943, “I think there is a world market for maybe five computers.”

Jason Fitzpatrick at The Centre for Computing History believes that these old computers are now becoming collectors items, and explains their growing appeal amongst today’s computer-savvy set.

Why is it important to retain a collection of old computers?

Computers have changed the world we live in. Not just at an industrial level, but our everyday lives. And the rate of these changes is unprecedented. Over the past 40 years we have seen computers shrink from behemoths that fill rooms to pocket sized, battery powered marvels – yet their power and capability have increased exponentially. It is said that “there is nothing so distant than the recent past” and this means that many overlook the historical impact of computers. If we do not act now to preserve this important aspect of our history, these artifacts and stories will be lost forever. The Centre for Computing History has been set-up to do just that.

Is there a growing interest in old computers and, if so, who from?

What did home computing mean to the UK – what would you say has been its main effect?

The home computer revolution created the UK games industry, it helped create a generation of entrepreneurs, programmers and electronics engineers. It was incredibly good for UK business. It also laid the path to all the gadgets we have today that we rely on .

Are old computers getting harder to find?

Yes, with each passing day another old computer is taken to the skip. They are also failing. The electronic components they use were never designed to last for 30 years! So quite often the computers donated to the museum don’t work 100%. Fortunately our dedicated volunteers have the skills and knowledge to get them up and running again.

In what ways can they still be used today?

Not many ways! They’re good for playing those great games like pac-man, space invaders and donkey kong but not for anything more serious. Saying that, we do take a fleet of BBC Micro computers to schools to introduce kids into the concept of computer programming! It goes down extremely well and the fact they are using computers that are older than they are quite amazes them!

What reactions do you get from people when they see older technology?

They love it! It’s nostalgic. The term “personal computer” is more accurate that anyone could of imagine. We spend so much time with our computers that we do form a relationship with it. This is apparent when people come in to donate their computer to us and ask us to “look after it”.  You see people’s faces light up with they see the computer they used to own. They might not have seen it for 20 years! But their face turns to concentration as they try to re-master the game that they spent so many wasted hours on as a child!

Is your musuem on the move?

Yes, The Centre for Computing History is currently in the process of re-locating to Cambridge and will be open again this year.

If you’re looking for an early home computer, try searching Preloved for some classic early examples. Here’s just a few to get you rebooted.

This Sinclair ZX Spectrum in immaculate condition and complete with original instructions and a choice of games.

A fantastic BBC Computer, along with software and a selection of home computer magazines from the 1980s.

iPad and iMac? Who needs them! Check out this early Apple Macintosh Performa 5200 and its accompanying software and mouse.

Coming Soon – Game Boys! The rise of home gaming with the help of a little blue squirrel!

How to Check for Caravan Damp

Vintage and Antique Hunting in France