The Keeshond is a medium sized dog, and was used as a watch dog on the barges, traveling the Rhine between Germany and Holland. It is a member of the Spitz group of dogs which include Pomeranians, Chow Chows and Alaskan Malamutes.

History of the Keeshond

The breed came to prominence during the Dutch Revolution as the symbol of the Dutch Patriot political party. The leader of this party, Cornelius (Kees) de Gyselaer, kept one of these dogs as a pet. Because of Gyselaer’s love of the breed, the dogs were given the name “Keeshond”: “Kees” was Gyselaer’s nickname, and “hond” is the Dutch word for dog.

The correct pronunciation of this breed is ‘kayz-hond’ with the plural being, ‘kayz-honden’. After the rebellion was defeated, the breed dwindled. In the early 1920’s they were introduced to the UK (when the breed was known as Dutch Barge Dogs) and today they can be found as affectionate family pets around the world. In Germany (and in other FCI governed counties) they are known as Wolfspitz.

Appearance of the Keeshond

Like all Spitz, they are identifiable by their wedge shaped heads, dense off standing coats and curled tails characteristically carried high over their backs. The general, overall appearance of a Keeshond in full coat can only be described as impressive. The large ruff that surrounds his wedge shaped, fox like head makes him stand out from the crowd!

His natural stance, ears pricked and erect, feet firmly planted and tail tightly curled and held high on the back has that stamp of alertness of the wonderful watch dog and companion that he truly is. The coat is double layered, with a soft, cream-coloured undercoat and a harsh top coat. The top coat comes in shades of grey with black on the tips. Keeshonden need a thorough weekly grooming, but rarely need to be bathed. Expect a Keeshond to shed their coat twice a year.

Male Keeshonds are 18” at the shoulder and bitches 17” and the average weight of a fully grown dog is between 14 and 21 kilos; with the males being heavier than the females. They generally have a healthy appetite and their weight needs to monitored especially if the dog has been neutered, as they can easily ‘pile on the pounds’.

Temperament of the Keeshond 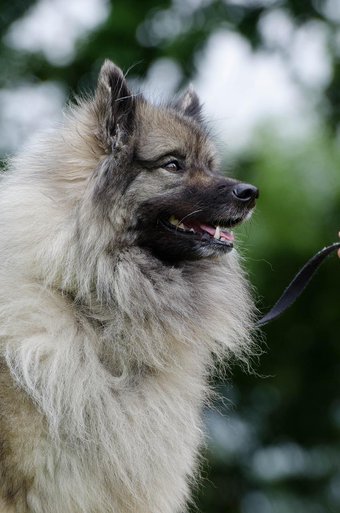 Keeshonden truly love people. In fact, they’ve earned themselves the nickname “Velcro dog” because of their tendency to stick to the people they love. If their owner leaves, a Keeshond may sit by the door and wait for them to come back, even if there are other people in the room. They do not do well in kept in kennels or being left alone all day. They love children and make excellent family pets. This breed is very empathic and intuitive, which has led to their use as comfort dogs for victims of traumatic experiences.

Like all Spitz breeds this breed loves to bark. They’ve been used as watch dogs for many years and even family dogs are skilled at letting you know when a stranger is at the doorstep. While your Keeshond may bark at someone they don’t know, they are not aggressive by nature and once they have been introduced to the new person they will be extremely friendly and sociable.

Health Considerations for the Keeshond

Keeshonden are a relatively healthy breed. The breed has a DNA test for Primary Hyperparathyroidism (PHPT) and all puppies now born in the UK are negative by descent; so there is absolutely no reason to buy a Keeshond puppy whose parents aren’t either tested or are themselves negative by descent. Full details of all tests (& results) are available from the Kennel Club’s web site and the PHPT status of all KC registered puppies is recorded on the registration documents.

Epilepsy and Alopecia X are also known in the breed, but there is active genetic research being undertaken at The Animal Health Trust and is fully supported by both breed clubs. A Keeshond’s average life expectancy is 13 years plus.

How best to care for a Keeshond

Training is important with this breed as with ALL dogs. Keesies are alert, lively and extremely intelligent dogs, making them a good choice for agility and obedience tasks. They generally do not adapt well to repetitive routine obedience exercises, preferring to be challenged with new exercises and games once one command is learned; so they are not always the best choice for strict precision obedience as they tend to have a sense of humour and to be clowns.

Intelligent dogs are often easily bored and can be stubborn and a Keeshond can be very inventive when bored! They are easily lead trained and will demand a walk a least twice a day, so if you are a couch potato, find yourself another breed! Exercise does not need to be excessive but it should be regular.

The North of England Keeshond Club were the first official club dedicated to Keeshonden in the UK. The club regularly hold committee meetings in order to promote Keeshond welfare and raise awareness about the breed.

Choosing A Horse or Pony

How to Take Photographs for Preloved Adverts

Treats Safe for Horses, and What to Avoid