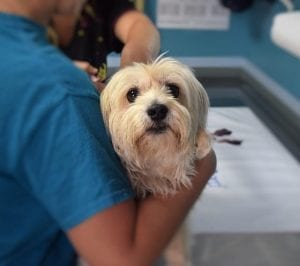 Microchipping is a straight-forward, inexpensive and easy method to ensure that if your pet goes missing (or is stolen) there’s a much greater chance that they will be returned to you safe and sound in the future.

With the microchipping of dogs set to become compulsory in April 2016, we give you some information and advice about this simple and highly effective procedure for keeping pets protected.

Which animals can be microchipped?

As of April 2016, it is the law for all dogs in the UK over eight weeks old to be microchipped.

There are lots of pets that can be microchipped, ranging from the more commonly known cats and dogs, to rabbits, horses and even reptiles. If you want to get your pet microchipped, your vet will be able to tell you about the different options available depending on the species, size and condition of your animal.

What is a microchip?

A microchip is just as it sounds – a tiny chip, about the size of a grain of rice. The chip is coated in a material called ‘bio-compatible glass’ which ensures it will not be rejected by the animal or cause any harm. They are made from the same material as that used in human pacemakers.

What information does a microchip hold?

Each microchip contains a unique code which is registered on a national computer database where it can be matched to the owner’s own contact details. Perhaps the most well-known database is PetLog. As such, it is vital that the owner keeps their current contact details up to date.

How is a microchip implanted into the animal?

The microchip is implanted into the animal with a simple injection. The procedure does not generally require any anaesthetic or stitches. It should leave no scarring and the microchip cannot be removed or tampered with.

Where is the microchip implanted?

With dogs, cats and rabbits, microchips are generally implanted between the shoulder blades. Different species of animals may have microchips implanted in other more suitable places on the body.

Microchips can be implanted by your local vet at a cost of around £20 to £30. A microchipping service may also be offered, sometimes at a reduced rate or even without charge, by local authorities and animal charities.

How are microchips read?

The information on the microchip is read by a handheld scanner.

Why should owners get their pets microchipped?

If an animal is found by an animal charity or local authority they will routinely scan it to see if it has a microchip. If it doesn’t, it’s almost impossible to trace its owner and reunite them. Microchipping your animal means that it is far less likely to be one of the thousands of animals lost in the UK each year that never return home.

How to Make Christmas Baubles from Light Bulbs

Add Images to Adverts from Your Mobile

Advice When Buying a Pedigree or Crossbreed

Confessions of a First Time Mum