We catch a lift with Martin Harrold of the Classic 2CV Racing Club to find out why this icon of French motoring has caught the imagination of a devoted club of unique racing enthusiasts.

How did the club begin? 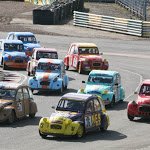 The following year, they organised the first 24 hour race, at MondelloParknear Dublin.

The Championship series, with the 24hr as the feature round, has been staged every year since.

The Citroen 2CV is an amazingly clever piece of auto-engineering. It is very easy to maintain and re-build. With stiffer springs and a few minor engine modifications, it turned out to be a low cost way to go motor racing. It requires great skill to lap quickly, yet novices can have great fun learning to race it.

How many members does the club have?

Each car in the 24hr race has three or four drivers, and has 30+ entries, so in any year there are around 120 members racing 2CVs.

Where do you meet for races? 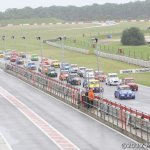 Our racing is organised by the British Automobile Racing Cluband runs on established racing circuits like Brands Hatch and Silverstone. The venues vary year by year, and in 2014, the club will race at OultonPark, Croft, CadwellPark, Pembrey and Anglesey.

What makes 2CVs so good for racing compared to other cars?

They are very cheap to buy, and secondhand parts are readily available. There are still huge numbers in use in France, Belgium, Holland and Germany. New original or pattern parts are widely available from specialist suppliers. With minimal electronics and an air-cooled engine which can be changed in 10 minutes by race teams, they are simple, reliable and low in cost.

The 602cc engine produces around 40bhp, so the trick is to keep the engine working as much as possible and do minimum braking. All the cars run at about the same speed, and for lowest lap times, one trick is to find another car and run very close behind it.

How much adaptation do they need?

We are allowed to fit very hard springs, some as stiff as 4000 ft/lb. The engine can have a slightly higher compression ratio and is very, very, carefully assembled. The jetting of the carburettor is done with great care.

What are the challenges of racing 2CVs? 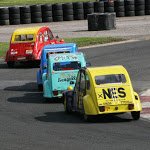 In sprint races, it is simply speed, as they last around 20 minutes. In the 24hr it is about reliability and team work. Cars come in every two hours to refuel and usually a driver change. Tyres are often changed and the engine is checked. Body damage is very common and has to be attended to, to make it safe. A pit crew that can do all that quickly and efficiently is vital to success. The driver’s main task is to stay on the black stuff and avoid contact with other cars – and, of course, go as fast as possible.

What speeds do you reach?

Max is about 85mph, downhill with a following wind. But race success means braking as late as possible into a bend and driving round it as fast as the grip of narrow road tyres will allow.

Is there a typical 2CV race driver (and do you have to be a little mad)?

Multiple 2CV champion Pete Sparrow is the only driver who was in the first-ever race and is still racing. He is naturally gifted and is also great at preparing 2CV race cars. I don’t know whether he is mad but he is certainly very enthusiastic about the pleasures of racing and, in his case, winning 2CV races. Many other racers just enjoy driving quite fast and very safely on a race circuit without the hassle of speed cameras or Mr Plod!

Is it an expensive racing sport? 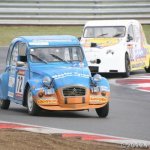 The 24hr cars are usually driven by four drivers who share, with each getting about three x 2-hour sessions for £600. Other costs of fuel, engines, etc, mean that a driver in the 24hr pays about £1300 for his share.

Any reaction from French visitors to your club?

2CV racing on circuits is peculiar to the UKand Belgium, with a few circuit races in France. The French like 2CV Cross, which uses stripped down cars racing over mud tracks and sand dunes. So we rarely see a French driver in our series.

Where can we find out more?

Visit www.2cvracing.org.uk to find our full calendar. Visitors are welcome in the paddock of any race. And as a taster, it is sometimes possible to rent a seat in a sprint race for around £300.

Add Images to Adverts from Your Mobile

Newest Technology: Do You Really Need It?