Do you love everything to do with Vintage, right down to how you get around? Well so do this unique club! We caught up with the Worcester Vintage Cycling Club to learn more about their love for vintage bicycles. 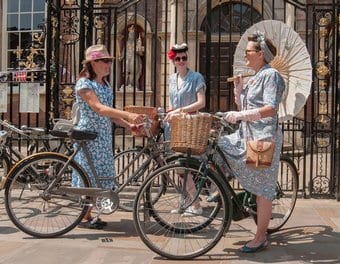 Tell us about your club?

The Worcester Vintage Cycling Club is unsurprisingly based in Worcester. We started it in the Spring of this year and we had our first official outing in May. It was started by myself – a vintage events organiser and run The Worcester Flea each month in the city centre – and Barbourne Bicycles, who sell secondhand and vintage bikes as well as brand new ones.

We’re not really an official club, more a loose collective of like minded people who go for rides together. We have about 10 core members, but we have many more people interested in joining in with our activities. Dressing up in vintage clothes is a big part of what we do, so we’ve dressed up on themes before and been asked to take part in other people’s events. Our own rides consist of fairly short, leisurely routes, often along the river Severn and whenever we can we like to include a picnic!

How did you get into vintage cycling? 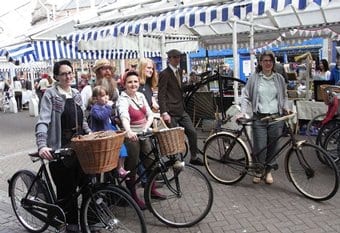 I’ve always been into vintage fashions and also work part-time in vintage clothing shop, Second Hand Rose, but the crossover into bikes came when I bought an as new secondhand Pashley earlier this year. Although it’s actually a new bike, it’s handmade in the UK, in Stratford-upon-Avonto be precise, in the same style and using virtually the same components as they have always made them since the 1920s, making it essentially a reproduction vintage bicycle. Andrew and Teresa from Barbourne Bicycles have always loved and collected genuine vintage bicycles and we both had the same idea about getting people with vintage or vintage-look bicycles together for regular ride.

Which cycles are classed as vintage?

I think that will be down to individual preference. Some vintage cycling clubs or vintage bicycle lovers will only be interested in mid -century (1950s) and before. We like to be as inclusive as possible, so if someone had a 1970’s shopper they wanted to join us on, we wouldn’t turn them away! We also welcome people with classic bikes – something modern that has been made in a traditional style.

What is the appeal of riding vintage cycles?

It has different appeal to different people. For me, it’s about the aesthetics of a vintage bicycle compared to modern ones, it’s nostalgia and the great fun of dressing up!

Describe the feeling of riding a vintage bike?

Vintage bicycles are often conversation starters, with people interested in their age and where they’ve come from. When you ride dressed up on vintage bicycles as a group, you’re obviously going to catch people’s eyes and look a bit of a spectacle, but people are really friendly and wave to us as we go past, and it’s nice to have that interaction with the public. They feel much like riding any bike, but there are practical differences like riding position. The older bikes are often a more upright ‘sit up and beg’ riding style which is actually a really comfortable riding position when you get used to it. The pace is usually very relaxed and gentle on vintage bikes which makes the experience all the more pleasant!

What makes them so special?

It’s mainly down to aesthetics, the older bikes just look great even if they’re a bit rusty! They seem to have so much more character than new, modern bikes and their age and signs of wear make them all the more interesting and raise lots of questions, such as where have they been ridden, by whom, how long ago?

Aren’t they hard work to ride?

They can be, it’s mainly due to the weight of the bike and as the very older models won’t have any gears going up any hills can be particularly hard work! 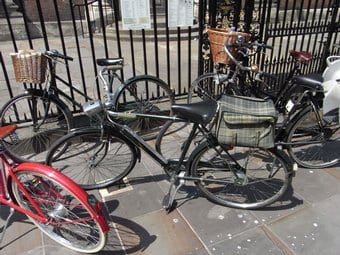 Where can you find them?

They are fairly easy to get hold of, online, secondhand shops and local bike shops that also deal in secondhand bikes. It’s also worth asking elderly relatives and seeing if they have any squirrelled away in their sheds!

Are particular eras more in demand?

Not especially. Most vintage bicycle enthusiasts are usually looking for something Victorian or Edwardian up to 1950s.

Was there a golden era for cycle manufacturing in the UK?

The real boom came in Edwardian England after the invention of the ‘safety bike’ which made cycling accessible for a lot more people. Cycling remained a popular mode of transport and leisure activity up until around the 1950s/early 1960s. As soon as most families could afford to own a car, its popularity as a mode of transport started to dwindle.

Which models are the most popular today?

Certain makes are slightly more sort after than others. A popular brand, for example, is Hercules which came out of Birmingham. They can fetch slightly higher prices, they have a rich history and their old advertising is great. There are lots of examples available to see on the internet. I’d quite like a Hercules for myself.

How easy is the up-keep?

Fairly easy to look after if they’re in reasonable condition to start with. They’re the same as any modern bike, but they are more prone to rusting, and if they still have the original old tyres they can be thin and prone to puncture or splitting due to perishing.

How do you get them repaired or find spare parts?

There’s a lot of people collecting old bikes so spare parts can still be fairly easy to locate online or from your local bike shop if you’re lucky and depending on what it is and if you’re happy to mix and match! If you’re a purist and only want original pieces that were on that particular bike then it might prove a bit trickier! It’ll sometimes be more practical to improve an old bike frame with a few more modern parts but still have a vintage looking bicycle, but it’s down to personal preference.

How are they different to their modern counterparts?

The big difference is weight! Most are solid steel, no lightweight metals here! They often don’t have any gears, which can be a challenge. The riding position can be the ‘sit up and beg’ style which can feel very different at first, and the handle bars can be curved round to the sides rather than right out in front of you.

Is there a typical vintage bike enthusiast?

Other than a penchant for wearing tweed as soon as temperatures permit, I’d say not really! Everyone’s 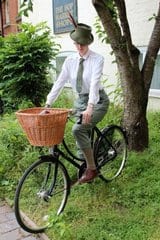 an individual even within shared interest groups like this.

Is there growing interest in vintage cycles?

Absolutely. You can see this with how big the famous Tweed Run has got over the years and how the prices of old bikes has increased.

Do you wear any particular clothing when out on the bikes? 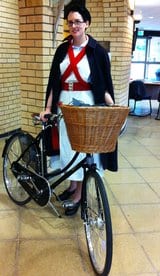 Most vintage cycling clubs and events require vintage dress or at least for people to play along and get into the spirit of it! I’m in my element dressing up in vintage clothing and have taken part in events dressed as a nurse/midwife, a 1940’s land girl and Joan Crawford. I like to go for it and the more overtly vintage and slightly OTT the better!

Why would you encourage people to take up vintage cycling?

Definitely. It can be a very satisfying project, to do up or restore a vintage bicycle, giving it a new lease of life. To dress up in era clothing to match your bike and ride with other like-minded people is a lot of fun and a great way to spend an afternoon!

Anything else you’d like to tell us about vintage cycling?

I would say get any old bike checked out by your local bike shop before embarking on an event a short ride. Make sure the brakes work, the tyres are decent and the chain is well oiled etc. All the sort of things you need to check on any bike but an old one especially! It’s not worth the hassle or risk to get caught out with faulty parts!

Ready to roll? Check out the selection of vintage and vintage-style cycles currently for sale on Preloved

Top 10 Picnic Tips | How to Have the Perfect Picnic

Destinations You Won’t Believe Are in the UK

Top Clutter Experts You Need To Know About

How to make a yarn hat ornament