When you have an unruly dog, it can be an attractive option to trial an electric collar to help improve your dog’s behaviour. Electric collars are marketed to be effective training tools by giving you the ability to communicate to your dog at the precise moment they are doing something wrong. Sound like the answer to your training needs? 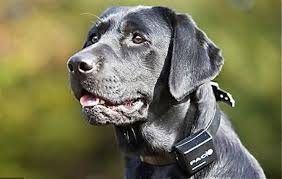 This form of training is popular in Europe and the U.S, and with an estimated 500,000 collars thought to be used across the U.K is becoming a popular training method for U.K dog owners too. Wales was the first country in the UK to ban the use of electric shock collars on dogs and cats in 2010, and this is why.

How can shock collars have a negative effect on the behaviour of dogs?

Before you use the collar on your dog, you need to decide what the correct level of shockshould be to ensure you administer enough shock to stop the behaviour, but not to cause your dog pain. This in itself is an almost impossible task, not only will it differ for the size of the dog, but there are many factors that can change the effect the shock can have on your dog from static factors like the thickness of your dog’s fur, to variable factors like the moisture on your dog’s skin.

Although an electric shock collar will give you an immediate response from your dog, it doesn’t mean it will be the correct one. When dog’s are faced with pain or fear, this will often omit a flight or fight repsonse. For electric shock collars to work effectively the dog needs to give a passive response. However, if a dog already has aggressive or nervous tendencies, it may result in a fight response which studies have shown can actually provoke or strengthen attack. A flight response is not always a healthy response for a dog either. Often dogs will “calm down” not because they have been able to associate the pain of the shock with something they did wrong, but because the have “learned helplessness”. This is when a dog is repeatedably unable to avoid the shock, so simply “gives up” and excepts the shock.

If there are incendents when the shock collars seems to have “cured” your dog’s behaviour, it doesn’t neccesarily mean your dog has been able to correctively associate the shock with the targeted incorrect behaiour. Instead it might learn to avoid the shock by avoiding certain stimuli. For example it might associate the shock with you, or the collar, or in instances where a boundary shock collar is used, with the garden. There has alse beensignificant evdence that the use of shock collars can create unnecessary amount of stress, so even though your dog may behave better, it doesn’t mean it will go on to live a happy stress free life, especially if the stimuli it assoicates with the pain are still present. 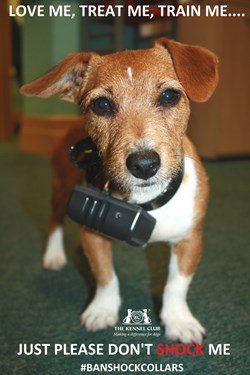 So why haven’t these training methods been banned already? The use of these collars is very controversial, with many experienced trainers championing the collars as effective tools. However, these collars are not just available to experienced trainers, but to the public. It can be argued that these collars can be effective, but perhaps not always when in the wrong hands. Even loving dog owners can mistakenly cause harm to their dog’s mental health when not properly trained to use such devices.  Defra released two research studies last year which showed that in a proportion of dogs where electric shock collarswere used, there were long term negative welfare impacts. This research also demonstrated that even when dogs were trained by professional trainers using electric shock collars to an industry set standard of best practice, there were still long term negative welfare impacts.

The Kennel Club is calling upon the governments to ban the use of electric shock collars as a dog training method. To learn more about their campaign (above)  please click on the link below or the poster above.

All of the above findings have been sourced from the below document.

The use of shock collars and their impact on the welfare of dogs: A review of the current literature – Emily Blackwell and Rachel Casey, Department of Clinical Verterinary Science, Univeristy of Bristol 2006.

The Kennel Club also have some detailed examples of what can happen when an electric shock is wrongly used.

What positive training methods could you use instead?

Postive reinforcement dog training methods may seem to take longer to reinforce into your dog’s behaviour, but have been found to be far more effective long term and is beneficial to your dog’s mental well being as well as it’s behaviour. There are lots of helpful resources readily available to help you train your pooch, here are just a few to get you started.

Reward-based training for dogs – via RSPCA

Preloved at the Festival of Thrift

How to Attract Wildlife to Your Garden

Meet a Business Member: The Interior Outlet on Selling Furniture

Check List When Welcoming a Dog Into Your Home