What is Upcycling and Why is it Important?

Humans are the only creatures on the planet that create waste. The by-products from other creatures function as food or shelter. But not us humans; we have broken the loop. We now create toxic waste that will remain on the earth for hundreds of thousands of years. And yet we are such creative beings.

So what can we do?

One way we can change it is through ‘upcycling’. Upcycling is the ‘process of converting waste materials or useless products into new materials or products of better quality or for better environmental value.’

In today’s world, stuff is wasted and thrown away, mostly by people who have more than enough stuff. While others go without. We chuck food away, while in some parts of the world people are starving. And, many things which could be put to good use end up in landfill. We’re a wasteful lot. But we don’t have to be.

Lurking in garages and sheds all over the world are dusty items which are not loved anymore, but are still in good condition. An old sofa or a discarded toaster, which someone else might need. So, instead of throwing it away, give it away.

Online groups such as Preloved are one way to upcycle and get rid of stuff you don’t want. These types of services sell anything from wheelbarrows and wedding dresses to sofas and motoring parts.

And, people all over the world are building their homes out of recycled waste. Such as Senior Design Lecturer at the University of Technology, Sydney, Rod Hayes who built his home out of recycled trusses, hard-wood timber and lots of stuff from an old railway junkyard.

It makes sense to reuse in this way, especially considering that the energy which goes into making ‘stuff’ is significant. 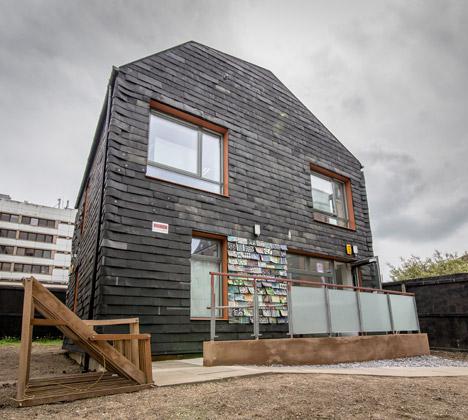 Projects in which to get involved

The Waste House project at the University of Brighton is proof that even rubbish can be put to good use. The Brighton Waste House was built out of ‘two tonnes of cast off denim jeans and 20,000 old toothbrushes’, designed by BBM Director Duncan Baker-Brown and 253 students and apprentices from The Mears Group and the Brighton University Faculty of Arts. It was a waste-full project, which will be used as a study space, community centre and educational resource.

And, while you’re making a choice to live differently, why not shop differently too. If you are interested in mixing your clothes up and wearing a selection of old and new, then it’s a good idea to start asking where your clothes are made and shopping at stores which support a more sustainable earth. There are a plethora of stores off the high street which are fashion forward and eco-conscious at the same time, such as vintage store Wolf & Gypsy in Brighton with it’s hand-picked, timeless garments. And, a large selection charity and thrift stores exist right across the country, which also sell their items online.

In order to stay in love with our things; we need to either change or adapt our thinking and ask, does the item which is being used have long term durability and recyclability?

David Ward of classic and vintage spare parts distribution company VW Heritage believes wholeheartedly in the value of keeping an older car which was built to last. The value is in the memories, and the way we cherish items which we hold on to for longer.

“People want to keep and hold on to classic cars as they are part of everyone’s history; VW Campervans and Beetles have become iconic because so many people have fond memories of them, and for that reason it is something that so many owners cherish.”

There are enormous advantages to maintaining a car through the use of spare parts which have been up-cycled from other models. Owning an old car for longer cuts down on the environmental impact of buying a new car, most of which is caused by the manufacturing and scrapping of a vehicle, rather than the actual driving.

We are all born creative – and the ability to heal the planet lies in every one of our hands. Our ancestors really knew what they were talking about when they told us ‘waste not, want not.’

Megan McAuliffe is a writer, journalist and blogger writing for sustainable and ethical buisness’ on issues relating to community, culture and lifestyle. You can find her on Twitter @meganeditorial.

Things That Are 21 This Year!

Going Back To Work If You Have Pets- What To Expect

Not for Profit Affordable Housing: Rebuilt4U