Despite its name, the Australian Shepherd breed was largely developed in America. They are intelligent, medium sized dogs with strong herding and guardian instincts. They can be delightful and loyal companions and great family dogs, as they love to be part of the daily hustle and bustle. They also make brilliant farm dogs, and will diligently carry out their responsibilities. Although easy to housetrain and eager to please, Australian Shepherds can be quite verbal at times and are not a dog for the faint hearted or first time owner. Australian Shepherds who are family pets should have basic obedience training and the chance to use their brains. Teach them to bring their toys, have them carry the post in, teach them to use their nose to track, or they have the potential to become downright obnoxious around the house if they become bored.

Australian Shepherds excel in Obedience, Working Trials, Flyball, Agility and Rally, as well as being a popular show dog. They have been used as Guide Dogs for the blind, search and rescue dogs, dogs for the physically handicapped, and many go to do valuable work as PAT dogs in hospitals and homes. The Australian Shepherd is a highly versatile dog. 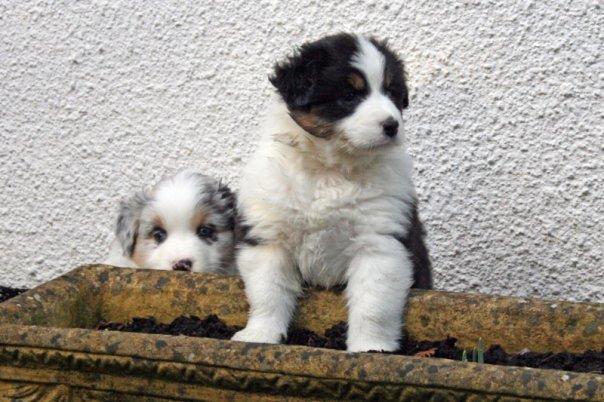 Australian Shepherds can be very loving and happy dogs, and tend to have one overall master. They can be reserved with strangers but are never usually overly shy or aggressive. They will live happily in a family situation as long as they have been exposed to children, cats and other dogs from an early age. People in hats, scarves, gloves, glasses: cars, trains, aeroplanes: concrete, grass, sand, gravel: cats, other dogs and animals, are just a few things that a good breeder and a new owner should be introducing to a puppy from within the first few weeks! The more you can socialise with your Aussie, the better.

An Australian Shepherd is not frightened of using its voice and can make a good guard dog. It will bark when unsure, in a new situation or around people it doesn’t know, but will quickly warm to new things once it has been reassured. They are also cheeky and fun loving, with a real mischievous side to them. There is nothing funnier than an Australian Shepherd in trouble from an owner with its ears flat to its head, big almond shaped eyes, and wiggling back end. It is hard to tell them off, but necessary to discipline them. 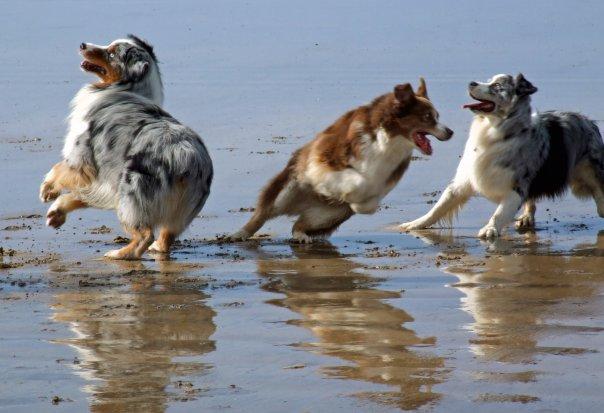 Living with an Australian Shepherd

When asked how often Australian Shepherds moult, the answer is 365 days a year. If you have a dislike of fur in your coffee cup, or on the rug in your house and the back of the car, then the Australian Shepherd may not be for you. Its coat should be brushed several times a week, and its feet, ears and hocks should be regularly trimmed.

Australian Shepherds have strong herding instincts and must be disciplined effectively to control their strong-willed nature. If I were to create an acronym using an Aussie’s nickname, it would be: Athletic, Unique, Strong willed, Stylish, Intelligent and Energetic. The Australian Shepherd is a wonderful dog but a lot of work should be put into training your dog before you introduce it into the home. Australian Shepherds love human company, so being left several hours a day whilst an owner is at work isn’t particularly ideal. Once you have been loved by an Australian Shepherd you will never look back, and they are like chocolates; you can never just have one. 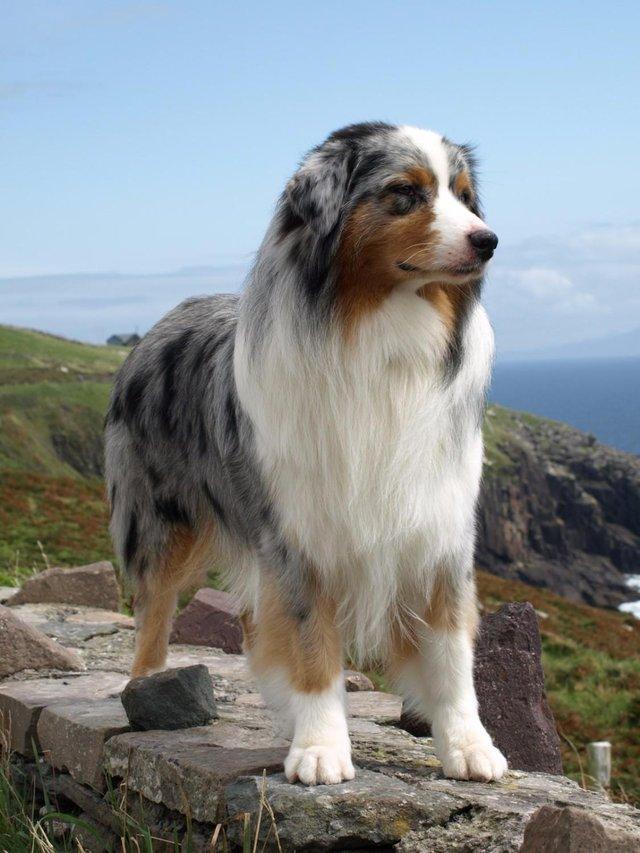 The Australian Shepherd is a muscular, medium sized dog with moderate bone. As the breed’s tails have been docked in the past, litters can have tails ranging from a natural bob tail, to a full tail, to anything in between. The coat of an Australian Shepherd should be straight to slightly wavy and weather resistant with undercoat.

There are four main colours of the Australian Shepherd which are: blue merle, black, red merle and red. These can all be with or without white and tan points. This means that there are over 20 variations in coat colour, and no one should take preference over another. Ears and eyes should be dominated by a colour rather than fully white. 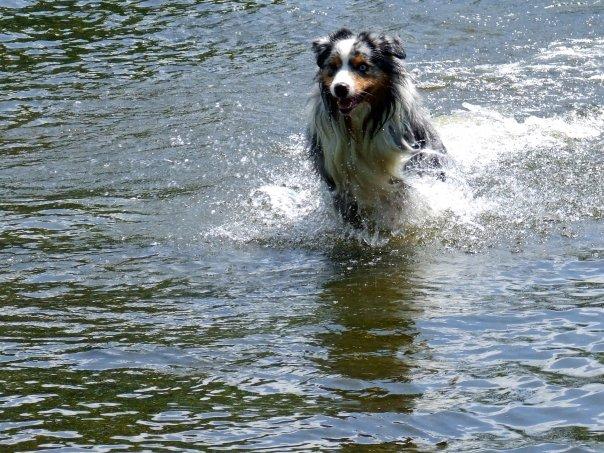 There are several health issues within the breed which may or may not be hereditary.

Aussies can inherit a number of eye defects which impair vision in varying degrees or can cause complete blindness. These include:

CEA affected puppies appear normal. The defects are within the eye and cannot be detected without special instruments. Positive diagnosis can only be made by a veterinary ophthalmologist or with a DNA test.

CEA is present at birth and does not progress. Affected puppies behave normally. Few will be so blind that the disease noticeably affects them. CEA does not cause the puppy any pain or discomfort, however affected dogs should never be bred from.

PRA has been reported in Aussies, but in very rare cases. Since the disease is progressive, it may require multiple examinations before diagnosis can be confirmed, and even then is often misdiagnosed. Any Aussie diagnosed with PRA should also have a DNA test to confirm the diagnosis. Affected dogs should never be bred from.

Cataracts are the most common eye disease in Australian Shepherds. They can be hereditary or can form due to disease and injury. Hereditary cataracts are bilateral, meaning they occur in both eyes, but they may not appear at the same time. If a cataract is noted on one eye, it is wise to recheck in 6 months to a year to see if one develops in the other. Cataracts do not cause the dog any pain and usually progress is slow enough that the dog adjusts to its loss of vision. In 2006, The Animal Health Trust (AHT) identified the first, and so far only, gene known to cause cataracts in Aussies. Their efforts have also made it clear there are other HC genes yet to be found. Again, affected dogs should never be bred from, and siblings bred from with care.

Responsible breeders will only breed from dogs with current clear eye certificates and owners should be encouraged to have their dogs’ eyes tested on an annual basis. All puppies should be eye tested clear prior to going to their new homes at 8 weeks old.

This is a condition of the hip and elbow joints in which the bones are not properly formed. It results in loose hip and elbow socket to bone connection. This causes hip and elbow pain and lameness. All breeding stock should be hip and elbow scored by the British Veterinary Association (BVA) with a score less than 14.

Seizures can be hereditary, or caused by the secondary effect of another disease or toxic exposure. If you have a dog that has seizures, the first thing you need to do is to try and work with your vet to try to establish why. With injury, other disease, or toxic exposure, treatment of the primary condition will stop the seizures in most cases, though if the primary condition causes permanent brain damage they may persist. A thorough veterinary check-up should reveal the cause of the problem if something other than hereditary epilepsy is involved. With virtually all of the other causes (the most likely exception being a brain tumour) there will be signs that something is wrong in addition to the seizures.

If no cause is found, the seizures are classified as “idopathic epilepsy,” which means they are of unknown cause (this type of epilepsy is generally thought to be inherited). There is not a positive test for primary epilepsy at present, so it can be diagnosed only by ruling out all other reasonable possibilities by process of elimination.

Primary epilepsy cannot be cured and will not go away, therefore no epileptic dog should be bred, nor should any first-step relatives (parents, offspring, full or half siblings). More distant relatives should be bred with great care to avoid other affected families. Inbreeding in epilepsy families should be avoided at all costs and even line-breeding should be discouraged. Selecting unrelated mates reduces the probability of producing this or any hereditary disease considerably. Knowledgeable breeders will be able to identify where epilepsy is in their pedigrees and breed away from it. If a breeder tells you that there is no epilepsy in their pedigrees, walk away and don’t set yourself up for heartache, as the disease is present within all Australian Shepherd pedigrees.

Australian Shepherds, along with several other collie-type breeds, can carry a genetic mutation that makes them sensitive to certain drugs. Fortunately there is an extremely accurate DNA test that will let you know whether your dog has this mutation. All you have to do is provide a cheek swab. MDR1 is the abbreviated name of a gene called Multi-Drug Resistance 1. A mutation of this gene causes sensitivity to Ivermectin and a number of other drugs. Dogs with the mutation will react to those drugs. Having two copies of the mutation could lead to drug reactions, but having a single copy can also confer some sensitivity with some drugs. Dogs with this mutation have a transport defect; the drug goes in to their brains, fails to be transported out, and builds up to toxic levels.

Cancer is the biggest killer in Australian Shepherd at present, the two most common cancers being Lymphoma and Hermangiosarcoma. It is felt that these cancers especially, are at least partly inherited in the Australian Shepherd.  Family trends in these cancers need further study. Other cancers that we are aware of in the breed include: Osteosarcoma, mast cell tumours, soft tissue carcinoma and leukaemia. Other health issues that can be tested for are:- Pelger Huet Anomoly and Cobolamin Malabsorption whilst Australian Shepherds can also be prone to thyroid dysfunction, heart disease, and allergies leading to serious skin conditions. These health conditions cause a great deal of suffering and medical expense. Needless to say, Australian Shepherds with family histories of such health problems should never be used for breeding purposes. Before you buy a puppy, ask the breeder if such conditions have appeared in relatives of the puppy’s sire or dam. A responsible breeder will know which problems crop up in their bloodlines, how to test for it and how to plan breedings to reduce the frequency of occurrence. 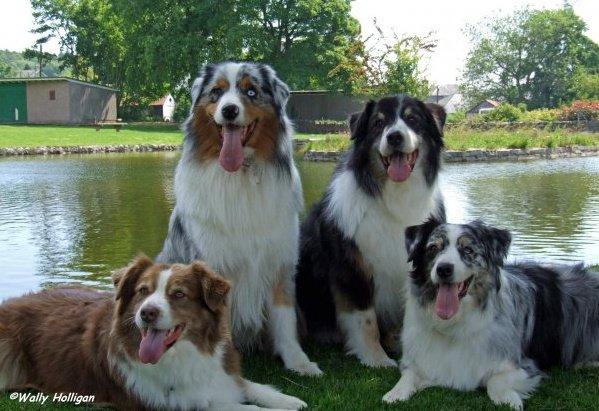 The main reasons why many Australian Shepherds need the help of breed rescue are:

A lot of people seem to love the ‘fluffy’ puppy at 8 weeks, but are unable to commit to caring for the dog once they realise the amount of effort which is required to make sure the dog maintains good behaviour and understands the boundaries set out to live as part of a pack. Whilst a puppy is great fun, please remember that a dog needs a forever home. If you think you have what it takes to provide this, please consider rehoming a rescue dog too.

How to Give a New Rescue Dog a Happy Home